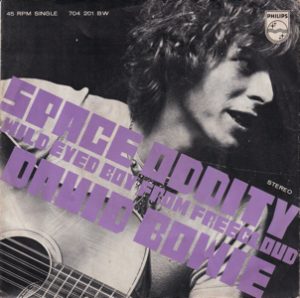 “Space Oddity” is a song written and recorded by David Bowie. It was first released as a 7-inch single on 11 July 1969. It was also the opening track of his second studio album, David Bowie. It became one of Bowie’s signature songs and one of three of his songs to be included in The Rock and Roll Hall of Fame’s 500 Songs that Shaped Rock and Roll.

The song is about the launch of Major Tom, a fictional astronaut, and was released during a period of great interest in space flight. The United States’ Apollo 11 mission would launch five days later and would become the first manned moon landing another five days after that. The lyrics have also been seen to lampoon the British space programme, which had only launched rockets at that time and has never attempted a moon landing. Bowie would later revisit his Major Tom character in the songs “Ashes to Ashes”, “Hallo Spaceboy” and the music video for “Blackstar”.

“Space Oddity” was David Bowie’s first single to chart in the UK. It reached the top five on its initial release and received the 1970 Ivor Novello Special Award for Originality. His second album, originally released as David Bowie in the UK, was renamed after the track for its 1972 re-release by RCA Records and became known by this name. In 1975, upon re-release as part of a maxi-single, the song became Bowie’s first UK No. 1 single. In 2013, the song gained renewed popularity after it was covered by Canadian astronaut Chris Hadfield, who performed the song while aboard the International Space Station, and therefore became the first music video shot in space. In January 2016, the song re-entered singles charts around the world following Bowie’s death, which included becoming Bowie’s first single to top the French Singles Chart. The song also ranked as third on iTunes on January 12, 2016.

Recording and release
Three primary studio versions of “Space Oddity” exist: an early version recorded in February 1969, the album version recorded that June (edited for release as a single), and a 1979 re-recording.

The early version of “Space Oddity” was recorded on 2 February 1969 for Bowie’s promotional film Love You Till Tuesday. This recording became commercially available in 1984, on a belated VHS release of the film and accompanying soundtrack album. It also appeared on the compilation album The Deram Anthology 1966–1968.

In June 1969, after Bowie’s split from record label Deram, his manager, Kenneth Pitt, negotiated a one-album deal (with options for a further one or two albums) with Mercury Records and its UK subsidiary, Philips. Mercury executives had heard an audition tape that included a demo of “Space Oddity”, recorded by Bowie and his then musical partner John Hutchinson in spring 1969. Next Bowie tried to find a producer. George Martin turned the project down, while Tony Visconti liked the album demo-tracks, but considered the planned lead-off single, “Space Oddity”, a ‘cheap shot’ at the impending Apollo 11 space mission. Visconti decided to delegate its production to Gus Dudgeon.

The album version of “Space Oddity” was recorded at Trident Studios on 20 June 1969 (with overdubs a few days later) and used the in-house session player Rick Wakeman (Mellotron), who was later to achieve fame with the progressive rock band Yes, as well as Mick Wayne (guitar), Herbie Flowers (bass), and Terry Cox (drums).[10] Differing edits of the album version were released as singles in the UK and US.

The song was promoted in advertisements for the Stylophone, played by Bowie on the record and heard in the background during the opening verse. The single was not played by the BBC until after the Apollo 11 crew had safely returned; after this slow start, the song reached No. 5 in the UK Singles Chart. In the US, it stalled at 124.

Besides its title, which alludes to the film 2001: A Space Odyssey, the introduction to the song is a barely audible instrumental build-up that is analogous to the deep bass tone in Also sprach Zarathustra that is prominently used in the film.

On 2 October 1969, he performed the song for an episode of Top of the Pops. However, this was recorded separate from the main audience. The performance was shown on 9 October the following week, and repeated on 16 October. At present, the performance is ‘missing’ due to the BBC’s late junking policy.

Upon its re-release as a single in 1973, “Space Oddity” reached No. 15 on the Billboard Chart and became Bowie’s first hit single in the United States; in Canada, it reached No. 16. This was then used to support RCA’s 1975 UK reissue, which gave Bowie his first No. 1 single in the UK Singles Chart in November that year. It spent two weeks at the top of that chart.

Bowie recorded a stripped-down, acoustic version of the song in late 1979, which was issued in February 1980 as the B-side of “Alabama Song”. The 1979 recording was rereleased in 1992 on the Rykodisc reissue of Bowie’s Scary Monsters (And Super Creeps) album.

The B-side of the original single, “Wild Eyed Boy from Freecloud”, first appeared on CD on 1989’s Sound + Vision. This compilation also included, as its opening track, the spring 1969 demo of “Space Oddity” featuring Bowie and Hutchinson. (An earlier Bowie/Hutchinson demo appears on the 2009 two-CD special edition of the album David Bowie.)

On 20 July 2009, the single was reissued on a digital EP that featured four previously released versions of the song and stems that allow listeners to remix the song. This release coincided with the 40th anniversary of the song and the Apollo 11 moon landing.