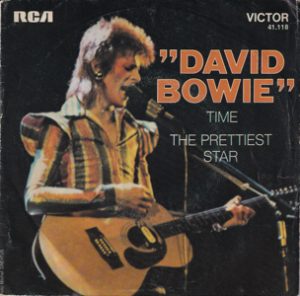 “Time” is a song by English singer-songwriter David Bowie. Written in New Orleans in November 1972 during the American leg of the Ziggy Stardust Tour, it was recorded in London in January 1973 and released as the opening track on side two of the album Aladdin Sane that April. An edited version of the song supplanted the release of the single “Drive-In Saturday” in the United States, Canada and Japan. It was also released in France and South Africa, while early Spanish copies of David Live included a free copy of the single.

The Japanese release featured “Panic in Detroit” on the B-side.