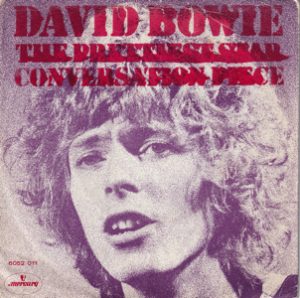 “The Prettiest Star” is a song by David Bowie, originally released as a single in March 1970.

In January 1970, Bowie re-recorded an old Deram track, “London Bye Ta-Ta”, intended as a follow-up single to “Space Oddity”. However, the same sessions spawned a new composition named “The Prettiest Star”, which Bowie had written for Angela Barnett, reputedly playing it down the telephone as part of his proposal to her. The song is in the style of the Greek hasapiko dance as a tribute to Angie’s Cypriot ethnic origin. He also chose it as his next single, to the displeasure of manager Kenneth Pitt, who favoured “London Bye Ta-Ta”.

The track featured Marc Bolan on guitar, with whom Bowie would spend the next few years as a rival for the crown of the king of glam rock. Producer Tony Visconti, who brought the two aspiring pop stars together in the studio, recalled that the session went well until the end when Bolan’s wife June remarked to Bowie, “Marc is too good for you, to be playing on this record!”

Despite receiving good notices, the single reportedly sold fewer than 800 copies, a major disappointment on the back of the success of “Space Oddity”.

Media Condition: Vinyl we look good. Side 1 plays with a little background noise (VG), Small tap on the last few seconds of the song. side 2 plays nicely (VG+).
Sleeve Condition: Very Good (VG+)
ring wear:
All three seams looking perfect: Yes
Picture sleeve looks near mint: No
creases or folds: No
stamps or writing: See photos for a neat quality case. small sticker from V&D on the back