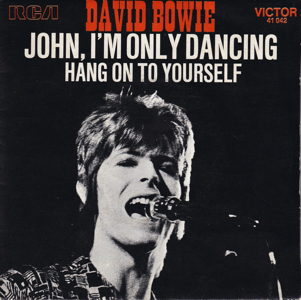 Recording and release
The song is widely believed to be concerned with a gay relationship, the narrator informing his boyfriend not to worry about the girl he’s with because he’s “only dancing” with her. Bowie had been ‘out’ as bisexual since an interview with Melody Maker in January 1972, and the subject matter did not affect the single’s radio airplay in the UK, where it and the earlier “Starman” became his first back-to-back hits. However, the original video directed by Mick Rock, featuring androgynous dancers from Lindsay Kemp’s mime troupe, was banned by Top of the Pops.

The single was not released in America, being judged too risqué by RCA, and did not officially appear stateside until it was finally issued on the compilation Changesonebowie in 1976. While the hook (“John, I’m only dancing / She turns me on / But I’m only dancing”) has long been considered a gay tease, author Nicholas Pegg asserts that the song’s narrator “could just as easily be a straight man reassuring the girl’s lover”. Alternatively, it has been suggested that Bowie wrote the song in response to a derogatory comment made by John Lennon about Bowie’s cross-dressing.

Musically in a light R&B style, the track was recorded on 26 June 1972, released as a single, and then re-recorded on 20 January 1973[8] during the Aladdin Sane sessions, in a slightly different arrangement featuring Ken Fordham on saxophone. Often called the “sax version”, the second recording was issued as a single in April 1973 with exactly the same catalogue number as the first release, causing difficulties for collectors. Generally held to be superior to the original cut,[3][9] the sax reworking also appeared on early pressings of Changesonebowie before it was replaced with the original single version.

In 1974, a completely reworked funk-influenced version was recorded as “John, I’m Only Dancing (Again)”; this song is described in detail
below.