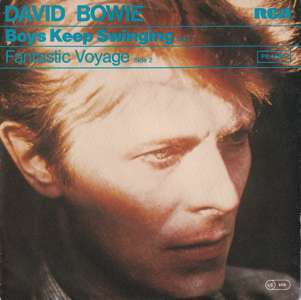 “Boys Keep Swinging” was released as a single from the album Lodger on 27 April 1979.

Recording and release
During the Lodger recording sessions, Bowie had wanted to capture a garage band style for the track, and agreed with Brian Eno that the best way to achieve this sound was to get the band to swap instruments after this was ‘suggested’ by Eno’s deck of ‘Oblique Strategies’ cards which supplied the suggestion “Reverse Roles”. Guitarist Carlos Alomar played drums and drummer Dennis Davis played bass.

“Boys Keep Swinging” has exactly the same chord sequence as the song “Fantastic Voyage”[citation needed] from the same album (“Fantastic Voyage” was also the B-side to the single of “Boys Keep Swinging”). RCA decided against releasing the single in the US, choosing “Look Back in Anger” instead. Bowie performed the track with a puppet body special effect on Saturday Night Live on 15 December 1979, joined by Klaus Nomi and Joey Arias as backing singers. During the broadcast NBC censors muted the lines “life’s a pop o’the cherry” and “other boys check you out”, but failed to notice the puppet’s bouncing phallus at the close of the song.

The song reached No. 7 in the UK, returning Bowie to the top 10 of the Singles chart for the first time since “Sound and Vision” in February 1977. It was performed only during one tour, the 1995 Outside Tour.[citation needed] Interviewed in 2000, Bowie said the following about the song: “I do not feel that there is anything remotely glorious about being either male or female. I was merely playing on the idea of the colonization of gender.”