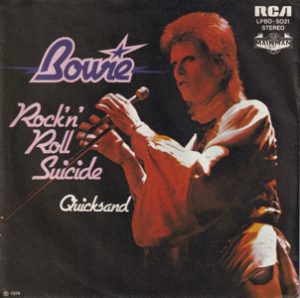 “Rock ‘n’ Roll Suicide” is a song by David Bowie, originally released as the closing track on the album The Rise and Fall of Ziggy Stardust and the Spiders from Mars in June 1972. It detailed Ziggy’s final collapse as an old, washed-up rock star and, as such, was also the closing number of the Ziggy Stardust live show.

Lyrics
Time takes a cigarette, puts it in your mouth
You pull on your finger, then another finger, then cigarette
The wall-to-wall is calling, it lingers, then you forget
Oh, you’re a rock ‘n’ roll suicide

You’re too old to lose it, too young to choose it
And the clock waits so patiently on your song
You walk past a cafe, but you don’t eat when you’ve lived too long
Oh, no, no, no, you’re a rock ‘n’ roll suicide

Chev brakes are snarling as you stumble across the road
But the day breaks instead, so you hurry home
Don’t let the sun blast your shadow
Don’t let the milk float ride your mind
You’re so natural, religiously unkind