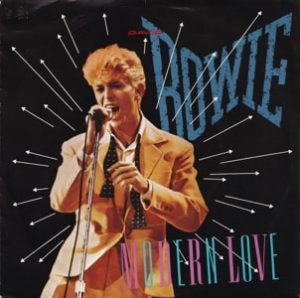 “Modern Love” was the third single from the album Let’s Dance in 1983.
Bowie claimed the song was inspired by Little Richard, and it maintains the album’s theme of a struggle between God and man.

By the time “Modern Love” was issued and edited as a single, Bowie’s Serious Moonlight Tour was underway. The track had become a popular encore on the tour, and Jim Yukich’s video for the song used footage of Bowie and his band performing the song from concert in Philadelphia on 20 July 1983. A live version, recorded in Montreal on 13 July, was on the B-side.

The single reached No. 2 in the UK, and No. 14 on the US Billboard Hot 100. As well as being a staple of the tour, it featured in Bowie’s set at Live Aid in 1985, and in his subsequent Glass Spider and Sound+Vision tours of 1987 and 1990. A re-recording with Tina Turner was also featured on a Pepsi commercial in 1987.

Other album appearances
The song has appeared on several compilations, almost always in its single edit form: