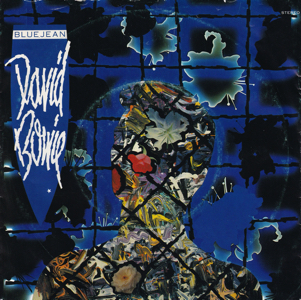 “Blue Jean” was released as a single ahead of the album “Tonight” and charted in the Top Ten in the UK and the United States, reaching No. 6 and No. 8, respectively. The song is loosely inspired by Eddie Cochran.

Following the commercial success of Bowie’s previous album, Let’s Dance, its singles and the Serious Moonlight Tour, “Blue Jean” was launched with a 21-minute short film, Jazzin’ for Blue Jean, directed by Julien Temple. The song performance segment from this was also used as a more conventional music video. The film won the 1985 Grammy Award for “Best Video, Short form” (Later renamed “Best Music Video”), which proved to be Bowie’s only competitive Grammy Award during his career.

Composition
Interviewed in 1987 and asked to compare a track like “Time Will Crawl” to “Blue Jean,” Bowie said “‘Blue Jean’ is a piece of sexist rock ‘n roll. [laughs] It’s about picking up birds. It’s not very cerebral, that piece.” BBC reviewer Chris Jones criticised the song in his appraisal of Best of Bowie in 2002, arguing “Blue Jean barely exists, so formulaic is it.”

Video versions
There are 3 versions of the video: