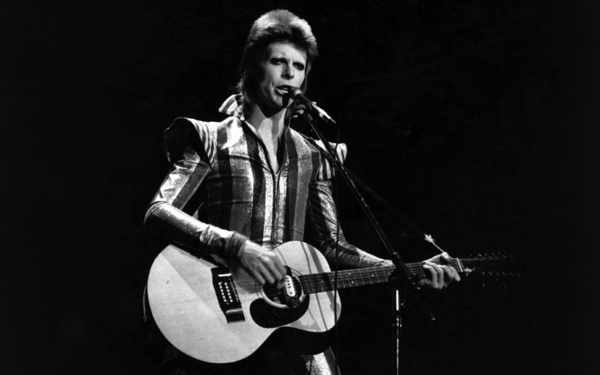 David Bowie was rescued from over-exuberant fans by his bodyguard following the sell-out Caird Hall concert and dragged away to the after-show party at the Angus Hotel in Nethergate.

The concert exactly 45 years ago is being remembered as Bowie’s official website and his legion of fans this week mark the anniversary of what eventually turned out to be the Ziggy retiral tour when things wound up in the UK in 1973.

Fans queued overnight in Dundee for tickets for the Bowie gig which was a 2,500 sell-out and the second time the glam rock star had played in the city following an earlier performance at the Top Ten Club at the Palais in 1966.

Bowie expert Mike Harvey, who runs the Ziggy Stardust Companion website, told The Courier that the Caird Hall gig happened at a time when ‘Bowiemania’ had exploded.

He said: “It was Bowiemania at its height — sort of like for the Beatles but this time in reaction to Bowie’s Ziggy Stardust phase.

“At the Caird Hall in Dundee Bowie was saved from being trapped by fans at his car by bodyguard Stuey George.

“Stuey George became Bowie’s bodyguard/minder and rescued Bowie from over-exuberant fans and unsavoury characters on a number of occasions during the Ziggy Stardust tours.

“He was to be the first of three main bodyguards employed to protect Bowie and project the image of star-minders.

“They did this by wearing karate-suits and Maoist-like arm bands titled ‘Bowie’ and were well-known for confiscating film from unauthorised photographers’ cameras.”

Richard Burdge, The Courier’s former Perth office chief reporter, was in the front row for the Dundee concert on May 17 1973 which he said was to take on even greater significance when Bowie eventually retired his Ziggy Stardust persona on the last night of the tour.

He said: “Effectively if you hadn’t seen him perform in this guise you never would.

“The Caird Hall audience was surprisingly restrained for much of the concert, remaining in their seats until the last few songs when the crowd surged forward and hundreds pressed against the stage.

“That exuberance apparently spilled over after the concert and Bowie found himself trapped at his car and had to be dragged to safety.

“It’s impossible to imagine a star as big as Bowie playing the Caird Hall nowadays. Within a few years, stadium gigs and festivals became the more lucrative choice for the biggest performers.

“Looking back 45 years, having a front row seat for one of rock’s legendary performances is a memory I cherish.”

Bowie continued to record and tour after hanging up his Ziggy persona and put out his final album shortly before his death in 2016.

Hang On to Yourself

Memory of a Free Festival

The Width of a Circle