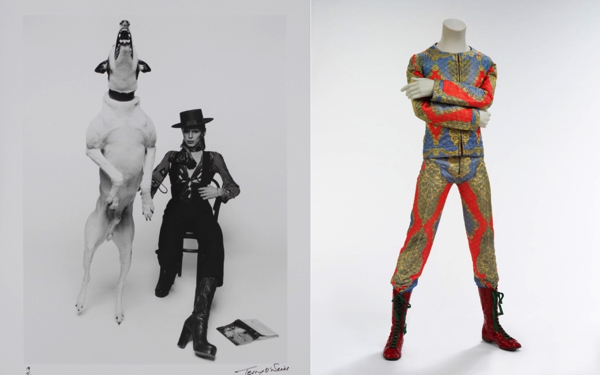 Continuing with its new paradigm of using augmented reality to cover the news, The New York Times has published a feature story that takes a peek into the late David Bowie‘s eclectic wardrobe of on-stage outfits.The retrospective showcases four iconic Bowie costumes, including the famed “Tokyo Pop” jumpsuit and the lightning bolt suit from the Aladdin Sane tour in 1973, his clown costume from the “Ashes to Ashes” music video in 1980, and the infamous “1980 Floorshow” bodysuit from his live TV appearance on NBC in 1973.

Users with the NY Times app for iOS or Android (and devices compatible with ARKit or ARCore) can view life-sized models of the costumes in their physical space, or place scaled-down versions of the pieces on tabletops. Those without AR toolkit support are able to view a scaled-down interactive experience via 3D models

The story is the third AR experience the Times has presented, following its introductory article on its AR initiative and its Winter Olympics coverage.

In this instance, the NY Times app also gives a taste of how musicians can leverage the technology to enhance their products.

With digital music and streaming services gaining in popularity, augmented reality could replace the album art experience that many music fans of older generations wax poetically about as the centerpiece of listening to the music of their youth. Because why stare at photos of your favorite artists when you can invite them into your bedroom?