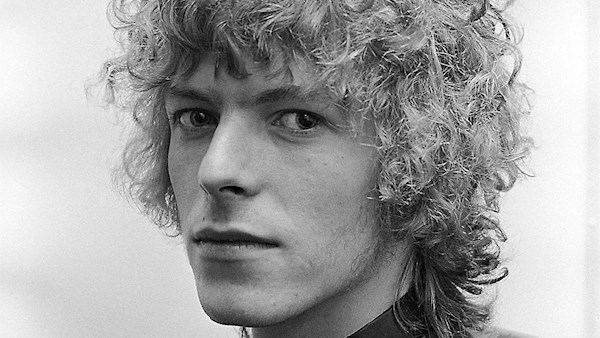 As a new box set of Bowie material from the 1960s pays homage to the late genius and Richard Purden spoke to some of the people who worked with him in that era.

ON July 3, 1973, an exhausted David Bowie informed auxiliary Spider From Mars John ‘Hutch’ Hutchinson to wait for his signal before strumming the opening chords of the much-loved torch song and set-closer ‘Rock N’ Roll Suicide’.

At that moment Ziggy Stardust would announce his retirement from the stage, breaking up the band and ending the juggernaut Aladdin Sane Tour which had been expected to continue throughout the rest of 1973. This also brought Hutchinson’s significant association with Bowie to an end.

With a special 50th-anniversary edition of Space Oddity being released earlier this year, and a forthcoming five CD box-set Conversation Piece featuring the ‘Mercury’ demos, there is a renewed focus on his first notable guitarist and sideman. Earlier this year two seven inch single box sets Spying Through A Keyhole and Clareville Grove Demos featured formative, home-recordings of ‘Space Oddity’ with Hutchinson on vocals and guitar alongside Bowie.

“I had bits of input and some suggestions but it was David’s song,” Hutchinson explains. “David had that quite strange arrangement because he had written it for the two of us, he wanted us to sing it together; David was Major Tom and I was Ground Control. At the time I didn’t think the song was anymore unusual than any of the others, the subject was current, space exploration was in the air but there’s been nothing dramatic as landing on the moon since.”

It has been suggested that Bowie also drew inspiration from circus performer Tom Major, the father of former British prime minister John Major, had featured on bill posters near Bowie’s childhood home in Brixton.

In the brio of swinging London, Hutchinson first met Bowie and ended up joining his backing band The Buzz in 1966. The pair would continue to work together in Feathers with Bowie’s girlfriend Hermione Farthingale.

Described by her as a “mixed media performance” the trio featured a mingling of songs, movement, poetry and mime. Despite no official Bowie album release in 1968, it was a prolific juncture which provided definitive influences such as Stanley Kubrick’s film 2001: A Space Odyssey and a spell in Lindsay Kemp’s mime troupe, experimenting with make-up and costume.

Bowie’s first long-player was notably influenced by Anthony Newley (later to do the music for Goldfinger and Willy Wonka & the Chocolate Factory). The self-titled 1967 debut is enchanting and often strange with its whimsical observations of suburban English eccentrics. Recent and forthcoming releases of subsequent home recordings fill a vital gap between this and his 1969 album also titled David Bowie, later released as Space Oddity in 1972.

‘Mother Grey’ from Spying Through A Keyhole, with its Ziggy-ish riff is a move towards a rockier style but for the most part, the songs are suggestive of the planned but never released follow up to his 1967 self-titled debut. After end of Bowie’s relationship with Farthingale he continued to work with Hutchinson. Songs such as ‘An Occasional Dream’ and ‘Letter To Hermione’ are Bowie processing the end of the love affair with the actress.

It was also during the recording of the album that Bowie’s father died at the age of 56. Guitarist Keith Christmas reflects on the time: “I came up with this running sort of riff on ‘Letter To Hermione’, I think that was my foremost contribution on the album. Working with David, he was not the kind of bloke who shared stuff, it was all very pragmatic but I remember listening back to the track ‘God Knows I’m Good’ with the engineers and everybody when David completely broke down in floods of tears.

“It was the first time I had saw something like that in studio, I had never saw anyone break down like that and I was quite shocked. People didn’t do that back then and men didn’t cry but he was in pieces and with what was going on in his life he probably was in a bit of a raw state.”

The recordings prove to be a fascinating document that reveal the genuine and tangible musical chemistry between Bowie and Hutchinson.

The duo was to be short-lived, with the guitarist returning to Scarborough in search of a working wage, but the demo would play a significant role in landing his friend a record deal with Mercury.

In the meantime Bowie recruited drummer John Cambridge for his second album. Cambridge, who struck up an instant rapport with the singer, would provide an essential link inviting eventual Spiders from Mars and Ziggy side-man, guitarist and arranger Mick Ronson to join with Bowie to record his 1970 album The Man Who Sold The World.

Hutchinson recalls that Cambridge had played with Mick Ronson in a heavy rock blues band (The Rats). “It was a sound that eventually suited the Ziggy Stardust character, Ziggy would not have suited folky music with harmonies. It was this fairly degenerate persona that people initially bought into, not David Bowie. The creation was a success and the Spiders were a big part of that.”

Cambridge, like the incoming Spiders from Mars, was also from Hull and would put Bowie up at his home and remain life-long friends with the singer. “His dad was a Yorkshireman so he was half-Yorkshire himself, I think that’s partly why we all got on so well. When recording we’d often mess about between takes, you can hear it on the track ‘Don’t Sit Down’, that’s us being daft and he’s falling about laughing.

“When it came to recording he really trusted you, he would sit down with his 12 string on a stool, and that would be you hearing the song for the first time, there were no rehearsals. He was just a mate and one of the lads really, I remember after he had been on television with ‘Space Oddity’ with the permed hair and Afghan coat, he came up to Hull during the week with Angie (Bowie) to get his car serviced.

“We were in The Gardener’s Arms pub and this guy said he looked like the bloke on telly the other night, he just laughed and said: ‘A lot of people tell me that’.”

Just months after Hutch had returned to Scarborough he would hear ‘Space Oddity’ being whistled by a workman. It had been released to

coincide with the Apollo 11 moon landings.

“I was back in the day job and I heard this guy working outside fixing the pipes and he was whistling the song. I said: ‘Where did you hear that?’ He replied: ‘On the wireless’, I thought fantastic David; you’ve done it.”

Conversation Piece, a five CD box set and digital equivalent is out on Nov 1. Bowie & Hutch by John ‘Hutch’ Hutchinson is available from Lodge Books. Keith Christmas Life, Life is out no