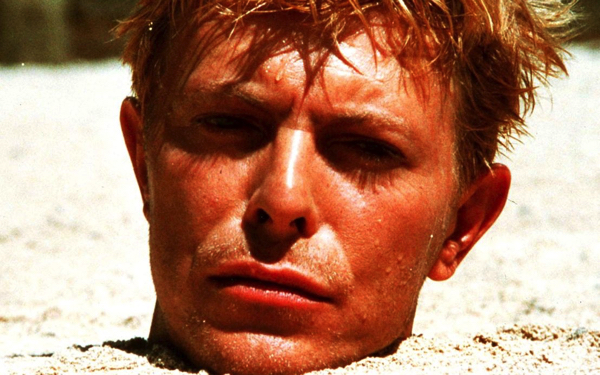 If films were made by pulling the lever on a fruit machine to generate a random combination of actors, plot and setting, you would occasionally get a hilarious freak like Merry Christmas Mr Lawrence. The fact that someone actually made a World War Two drama starring David Bowie and Takeshi Kitano – with queer undertones, an ’80s synth soundtrack and a powdering of Christmas spirit – well, it’s a miracle.

At heart the film seems sweetly, naively simple. It’s a story about East-West relations that plays out in the microcosm of a Japanese PoW camp in Java. It’s a story about forgiveness and understanding between cultures. It’s a film of clean-cut dichotomies. East versus West, patriotism versus pragmatism, guilt versus shame. And each of these struggles is embodied in the battle of wills of two pairs of officers: Jack Celliers (Bowie) and Captain Yonoi (Ryuichi Sakamoto) and John Lawrence (Tom Conti) and Sergeant Hara (Kitano).

Bowie plays an upper-crust enigma, a paratrooper who defies authority in typically unorthodox ways like eating flowers and leading sing-a-longs. Captain Yonoi, the camp’s commandant, is from the warrior class. He’s obsessed with two things: bushido and Bowie. And as the plot develops, they pull him apart. Then there’s Lawrence, sensitive and bilingual, constantly shuttling between the two cultures and trying to translate their values. He spars with Kitano, who plays a sort of Japanese Falstaff, a violent boozehound prone to flares of largesse.

The roster of celebrities has a strange effect on everything. This is a ‘Let’s Dance’-era Bowie, with sharp teeth, tanned skin and peroxide hair. Ryuichi Sakamoto is a Japanese rockstar who kept the eye-liner and contouring for the role. And the comedian and film-maker Takeshi Kitano is one of the most well-known faces in Japan. Those whisky adverts with Bill Murray in Lost in Translation? Kitano does those in real life.

The iconic faces make it hard to suspend disbelief. But the plot essentially revolves around the escalating tensions between the prisoners and their guards: the noble, stoic Brits and the cruel, code-bound Japanese. The film lionises the West and, at times, it demonises the East. Bowie is an eccentric hero, but certainly a hero – and clearly where our sympathies are meant to lie. It feels like a stock bit of Western storytelling: not exactly racist, but not too subtle or balanced either. Which is why the hue of the film changes so suddenly when you see the name of the director. Because Nagisa Oshima is Japanese.

With Captain Yonoi’s obsessive love for Bowie, Oshima was questioning Japanese ideals of soldiering and masculinity. With the portrayal of ritual suicide as brutal and botched, Oshima was questioning the notion of a beautiful death. And by showing acts of sadism by the Japanese, he was challenging the collective, selective amnesia that had settled on his nation. The comparisons with the West are continuous, and mostly and deliberately unflattering.

The Japanese actors are not helped by being made to speak English. Dramatically, it means the die are loaded: the Brits seem collected, the Japanese sound strained. In fact it highlights a more fundamental clash in acting styles, too: where the British act as if the events were truly happening, the Japanese act more theatrically, even histrionically, their faces at times contorted like Kabuki masks. By clashing styles, Oshima is making a point – even if it does often puncture the drama.

Is Merry Christmas Mr Lawrence a good film? It’s hard to say. It is – sometimes deliberately, sometimes unintentionally – strange, compelling and hilarious. It’s no Christmas classic, but like any Christmas film worth its salt, it ends on a hokey note, with the tables turned and Kitano now Lawrence’s prisoner. In war, Lawrence muses, everybody’s wrong, and therefore nobody’s wrong. The screen cuts to black with a final image of Kitano’s grinning face. But that final sentiment, smiling and conciliatory, sticks in the throat. Because it’s exactly the logic used by those who whitewash Japan’s past today.