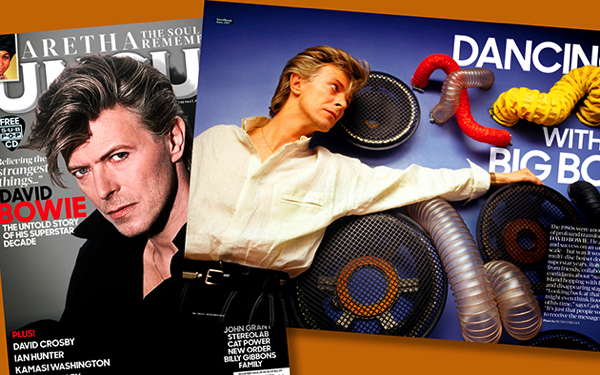 The new issue of Uncut – in shops now or available to order online here – presents the untold story of David Bowie’s 1980s, the decade that found him achieving fame and success on an unprecedented scale – but was it worth it?

The feature is hooked to the release of Bowie’s latest career-spanning box set, Loving The Alien (1983-1988), on October 12. Perhaps the most intriguing feature of package is the inclusion of an entirely new recording of Never Let Me Down. Initially released in April 1987, Bowie later dismissed the album as “awful”, regretting his lack of application when it came to the record’s production.

“About a year later, David and I were sitting on deckchairs by Mountain Studio in Switzerland, looking across Lake Geneva,” recalls songwriter/guitarist Reeves Gabrels, with whom Bowie had just begun recording as Tin Machine. “He started telling me, ‘Y’know, I’m proud of the songs on Never Let Me Down, but I wasn’t in the best shape and wasn’t as present as I should’ve been at the sessions.’ He later pointed to a couch in the studio and said, ‘I did most of my work on the record from there, passed out.’ He blamed himself for a lot of it and suggested we try re-recording some of those songs back then. It was a subject that would come up periodically through the years, usually late at night on the tour bus or in the studio.”

Order the latest issue of Uncut online and have it sent to your home!

Under the guidance of engineer/producer Mario McNulty, Gabrels is now part of the band responsible for finally granting Bowie his wish, alongside David Torn (guitar), Sterling Campbell (drums) and Tim Lefebvre (bass). The revamped Never Let Me Down also features string arrangements by Nico Muhly and a guest appearance by Laurie Anderson. Bowie himself set the ball rolling in 2008, when he asked McNulty to re-record and remix “Time Will Crawl”, the album’s second single, for his iSelect compilation. “Oh, to redo the rest of that album,” wrote a wistful Bowie in the liner notes.

“There were three major changes that David was specifically looking for when we redid ‘Time Will Crawl’,” McNulty tells Uncut. “One was replacing the cold, badly programmed drum machines with real acoustic drums. He also wanted to have a very modern string arrangement, in the style of Philip Glass or Steve Reich. And the other thing was to make a new arrangement, getting rid of most of what was there, then taking bits and looping them. He was getting creative with the existing track.”

Tackling “Zeroes” was a particularly poignant moment for Gabrels. “Mario played it to me with bass, drums and just David’s acoustic guitar and vocals on the first day at Electric Lady,” he says. “I was like, ‘Wow! There’s a song here!’ It was obvious that a second acoustic guitar would beef it up a little. One of the things David and I often used to do, from Tin Machine through to Hours [1999], is play double acoustic guitar together. Sometimes he’d play 12-string and I’d play six-string, and vice versa. We’d sit facing each other with our guitars in front of the mics. So I started playing ‘Zeroes’ on acoustic guitar, with my eyes closed while we were recording. In my mind’s eye I saw David sitting across from me. I could see the way he would move his shoulder and even the way he’d cross his legs and bounce the crossed leg while he was playing. He’d look at you, but at the same time get this faraway look in his eye. When I got to the end of the track, I opened my eyes and of course he wasn’t there. I knew at some point during the session that I was going to feel like I was about to cry. I was just glad I was sitting alone in the studio when it happened.”

Read much more about the new version of Never Let Me Down and David Bowie’s 1980s in the new issue of Uncut, in shops now or available to order online here.