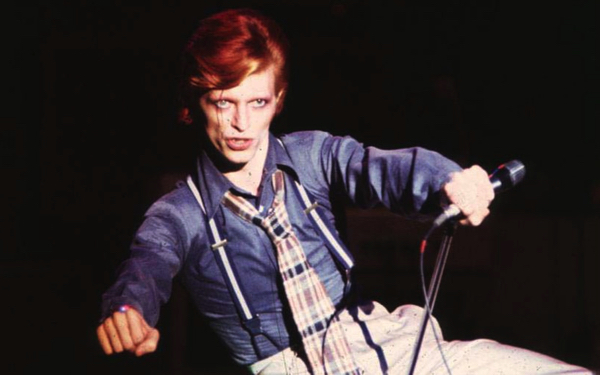 Dorian Lynskey tells the tale of how it (almost) inspired a rock musical
Read other extracts from his book on the novel’s history:
• Big Brother’s long shadow: the legacy of Orwell’s Nineteen Eighty-Four
• ‘He typed in bed in his dressing gown’: how Orwell wrote Nineteen Eighty-Four

On a bright, cold day in April 1973, David Bowie and his percussionist, Geoff MacCormack, boarded the Trans-Siberian railway in Khabarovsk. The aviophobic singer was taking the long way home to London from his Japanese tour. The week-long journey to Moscow was a lark to begin with, but the closer they got to the capital, the thicker the atmosphere of tension and suspicion became. In Moscow, Bowie watched a day-long military parade from the window of his hotel on Red Square. “On my trips through Russia I thought, well, this is what fascism must have felt like,” he later said. “They marched like them. They saluted like them.” As the train to Paris passed through the no man’s land between East and West Berlin, the two men were stunned into silence by the still bombed-out ruins.

This heavy trip intensified Bowie’s growing sense of paranoia and panic. On the last leg of the journey home, he spoke to Roy Hollingworth from Melody Maker about how it had changed him. “You see, Roy,” he said, chain-smoking manically, “after what I’ve seen of the state of this world, I’ve never been so damned scared in my life.”

You always felt you were in 1984. That’s the kind of gloom and immovable society that a lot of us felt we grew up in

One did not need to have travelled through Brezhnev’s Russia to feel fearful in stagflation-hit 1970s Britain, which, as well as the three-day week, saw the return of blackouts, petrol rationing and an IRA bombing campaign. Millions of Britons still listened to Slade and the Osmonds, went to see Live and Let Die and The Way We Were, relaxed in front of Are You Being Served? and Porridge, enjoyed their extra days off and generally went about their business. But Bowie’s antennae were attuned to shriller frequencies. His song Life on Mars? had looked for a way forward among the debris of the 1960s; Five Years was a histrionic countdown to Armageddon; the ominous parenthetical in Aladdin Sane (1913-1938-197?) pencilled in a third world war. “I’m an awful pessimist,” Bowie confessed to NME. It was not at all surprising that his mind was turning to writing a rock musical based on Nineteen Eighty-Four.

By 1973, sales of Nineteen Eighty-Four had passed 1m in the UK and at least 10m in the US. Rock bands had assimilated the novel into rallying cries for the counterculture. “Oh, where will you be when your freedom is dead 14 years from tonight?” asked Spirit on their single 1984, released during the dying weeks of the 60s. “We don’t want no Big Brother scene,” cried John Lennon on Only People. In Stevie Wonder’s cool, contemptuous Big Brother, BB represented the Nixon administration. Orwell’s dictator was now another name for The Man.

Bowie had been obsessed with Orwell’s novel since growing up in postwar Bromley, in a house less than a mile away from the birthplace of HG Wells. “You always felt you were in 1984,” he said. “That’s the kind of gloom and immovable society that a lot of us felt we grew up in… It was a terribly inhibiting place.”

In November 1973, Bowie told William Burroughs that he was adapting the novel for television and gave his NBC TV special the mischievous title The 1980 Floor Show. During the show, he debuted a new song called 1984/Dodo, one of 20 he claimed to have written for the adaptation, although attempts to write an actual script with the American playwright Tony Ingrassia had come to nothing.

He was therefore furious when Sonia Orwell refused permission for his rock musical. “For a person who married a socialist with communist leanings, she was the biggest upper-class snob I’ve ever met in my life,” he told Circus writer Ben Edmonds. “‘Good heavens, put it to music?’ It really was like that.” Doubtless, Sonia did hate the idea, but then she had approved almost no adaptations in any medium since the fiasco of the 1956 movie and she certainly didn’t meet Bowie, so that anecdote can be taken with a pinch of salt. It’s debatable whether a hypermodern, hedonistic, bisexual rock star would have had better luck with a 70-year-old Orwell.

Bowie’s eighth studio album, initially titled We Are the Dead, was, therefore, a salvage operation. “To be quite honest with you… the whole thing was originally 19-bloody-84,” he told Edmonds. “She put the clappers on [the musical] by saying no. So I, at the last minute, quickly changed it into a new concept album called Diamond Dogs. I didn’t ever want to do Diamond Dogs as a stage musical; what I wanted was 1984.”

At this critical time…

… for our natural world, our societies and our media, The Guardian is committed to a different model for open, independent journalism – sustained through generous reader support. When progressive ideals are being challenged by those in power across the globe, we’re dedicated to investigating with courage and reporting with honesty. But we need your ongoing support to keep working as we do.

The Guardian will engage with the most critical issues of our time – from the escalating climate catastrophe to widespread inequality to the influence of big tech on our lives. At a time when factual information is a necessity, we believe that each of us, around the world, deserves access to accurate reporting with integrity at its heart.

Our editorial independence means we set our own agenda and voice our own opinions. Guardian journalism is free from commercial and political bias and not influenced by billionaire owners or shareholders. This means we can give a voice to those less heard, explore where others turn away, and rigorously challenge those in power.

We need your support to keep delivering quality journalism, to maintain our openness and to protect our precious independence. Every reader contribution, big or small, is so valuable.

Support The Guardian from as little as €1 – and it only takes a minute. Thank you.