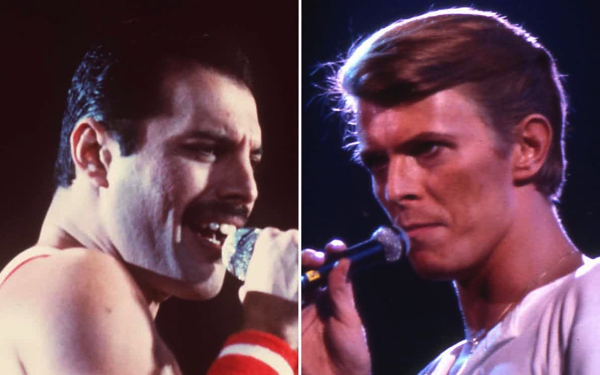 Exclusive: ex-roadie says star and band, who duetted on 1981 hit Under Pressure, made number of ‘raw but good’ tracks

David Bowie and Queen recorded a whole batch of songs that have never been released, according to a former roadie.

The tantalising prospect of a hidden cache of recordings by such huge rock stars has been revealed by Peter Hince, who was head of Queen’s road crew when the band and Bowie collaborated on their hit song, Under Pressure, in 1981.

He has disclosed that there was “other material Queen recorded with Bowie that never got released”. He was in the studio with them when they performed and recorded it.

The revelation will be published in a forthcoming book on Bowie by Neil Cossar, a music historian. In one passage, Hince recalls: “They … performed some original songs they did together and also covers. They were just jamming in the studio and it all got recorded – All the Young Dudes, All the Way from Memphis and various rock classics.”

Speaking to the Guardian on Wednesday, Hince said there was no question that the recordings exist.

Bowie’s estate and Queen’s management declined to comment, but Hince’s recollections are given credence by a throwaway remark made by Queen’s guitarist, Brian May, last month. In an interview with Mojo to promote his new book, Queen in 3-D, May recalled how “Freddie and David locked horns” while recording Under Pressure, but that such things happen in a studio. “Sparks fly and that’s why it turned out so great.” He added: “Not all of what we did in those sessions has ever come to light, so there’s a thought.”

Hince said Queen’s drummer, Roger Taylor, as one of Bowie’s greatest fans had invited the singer over and that when he arrived, there was clearly “mutual admiration”. They began making music together, he recalled.

“They just started knocking things around. They did cover versions [and] a few of their own things … They came back the next day and then recorded what eventually became Under Pressure,” he said. “But there were other things recorded during that period, which were never finished or mixed. David did vocals on some of the other tracks which ended up not being used. So somewhere there is an archive.”

The material goes beyond their Cool Cat recording, which originally featured Bowie’s vocals, he added: “I was in the studio with them. It was all quite spontaneous. It was one of those rock’n’roll moments. They were just fooling around and played each other songs. Certainly, there were other tracks recorded with Queen and Bowie, and Freddie singing, which were never released. Pretty raw, but original material definitely. They were just incredibly spontaneous, good musicians.

“I can categorically say I know that there were complete tracks, not mixed tracks, but fully formed songs that were done. Does it belong to the David Bowie estate or to Queen? That’s probably part of the reason these things have never come to light.”

Hince knew Bowie well, having worked as one of his roadies “in the Ziggy and Diamond Dogs days”: “David and Freddie were totally different people. David was quite quiet. He would never scream and shout if things went wrong. He never played the prima donna. Privately, Freddie was quite quiet. But if things weren’t going his way, he’d let you know in no uncertain terms.”

In 1986, after more than a decade as head of their road crew, Hince left Queen to pursue his other passion, photography.

Asked whether he was aware of unreleased recordings until now, Cossar said: “I’m a music historian and I’d never heard that story before.”

Cossar’s book, David Bowie: I Was There, featuring recollections of the star’s fans, musicians and others who worked with him, will be published on 21 July by Red Planet Publishing.