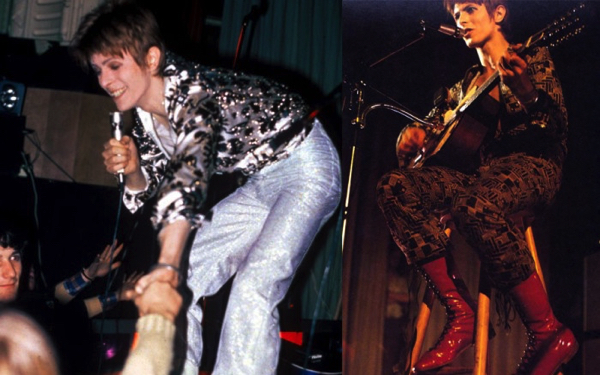 He said: “Aylesbury was really the place where we tried out the Ziggy shows, we had been to a few places before and tried some of the songs but we needed to do it with costume changes and lighting and see what would work. “It was really a pivotal moment for us and a rock milestone, to see the crowd’s reaction to what we were doing was such a relief. “What I really remember from that night was the audience, we had played Hunky Dory before and that hadn’t been as well received, but with Ziggy it was firing on all guns.” Promoter David Stopps said: “The first Spiders gig was 25th Jan 1971. That’s when Bowie formed the band in the Friars dressing room (although they weren’t called the Spiders at the time). I was in the dressing room with him when he did it.

“That was the gig where he performed Hunky Dory for the first time.” Queen’s Roger Taylor also has fond memories of the historic outing, which he attended with Freddie Mercury. He said: “I got Freddie out in my little mini and I remember the lights didn’t work very well and we were going around the roundabouts and he was going “Oh dear – I don’t think you can see dear, can you?” and I said “Don’t worry Freddie it will be all right” and anyway, we did get around the roundabouts and we got out to Friars Aylesbury which seemed like the end of the earth at that time.

“I think it could have been the first-ever Ziggy Stardust gig and it blew us away – we were blown away – it was so fantastic, like nothing else that was happening and so far ahead of its time – The guy had so much talent to burn really and charisma to burn as well. I hate to gush but he did have it like no-one else did at the time.”

Since his time in the Spiders, alongside legends Mick Ronson, Trevor Bolder and later Dave Black and Mike Garson, Woody has enjoyed a glittering career as one of rock’s most respected drummers.

To name a few he formed his own 70’s rock outfit Woody Woodmansey’s U-Boat, toured with folk legend Art Garfunkel and penned a book about his experiences.

And Woody is looking forward to playing The Rise and Fall of Ziggy Stardust and the Spiders From Mars in town for the first time since July 1972, Ziggy’s second outing in Aylesbury – when he and his band Holy Holy take to the stage at the Waterside on Monday April 3.

Holy Holy has been performing together since 2013, when Woody, and Bowie’s music producer and long-time friend Tony Visconti decided to form a band to play The Man Who Fell To Earth, an album they had both originally played on, but never played live. The

And Woody offered his support for news that Aylesbury will be the first place in the world to have a statue of Bowie, in recognition of the iconic Hunky Dory and Ziggy Stardust shows and in honour of the music pioneer who died in January 2016.

He said: “I think it’s brilliant, it’s nice to acknowledge him like that and Aylesbury is such an important part of the adventure.

“It was a pivotal point for us and it’s right that the statue should be there.

“David Bowie was a one man renaisance.”