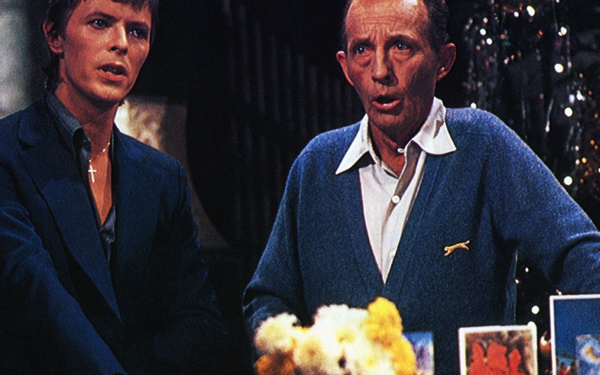 One of the most successful duets in Christmas music history — and surely the weirdest — might never have happened if it weren’t for some last-minute musical surgery. David Bowie thought “The Little Drummer Boy” was all wrong for him. So when the producers of Bing Crosby’s Christmas TV special asked Bowie to sing it in 1977, he refused.

Just hours before he was supposed to go before the cameras, though, a team of composers and writers frantically retooled the song. They added another melody and new lyrics as a counterpoint to all those pah-rumpa-pum-pums and called it “Peace on Earth.” Bowie liked it. More important, Bowie sang it.

The result was an epic, and epically bizarre, recording in which David Bowie, the androgynous Ziggy Stardust, joined in song with none other than Mr. “White Christmas” himself, Bing Crosby.

In the intervening years, the Bowie-Crosby, “Peace on Earth/Little Drummer Boy,” has been transformed from an oddity into a holiday chestnut. You can hear it in heavy rotation on Christmas-music radio stations or see the performance on Internet video sites. First released as a single in 1982, it still sells today — to add to its quirky afterlife, it’s part of an album that’s ranked as high as No. 3 on the Canadian charts this month. How did this almost surreal mash-up of the mainstream and the avant-garde, of cardigan-clad ’40s-era crooner and glam rocker, happen?
It almost didn’t. Bowie, who was 30 at the time, and Crosby, then 73, recorded the duet Sept. 11, 1977, for Crosby’s “Merrie Olde Christmas” TV special. A month later, Crosby was dead of a heart attack. The special was broadcast on CBS about a month after his death.

The notion of pairing the resolutely white-bread Crosby with the exquisitely offbeat Bowie apparently was the brainchild of the TV special’s producers, Gary Smith and Dwight Hemion, according to Ian Fraser, who co-wrote (with Larry Grossman) the song’s music and arranged it.

Crosby was in Great Britain on a concert tour, and the theme of the TV special was Christmas in England. Bowie was one of several British guest stars (the model Twiggy and “Oliver!” star Ron Moody also appeared). Booking Bowie made logistical sense, since the special was taped near his home in London, at the Elstree Studios. As perhaps an added inducement, the producers agreed to air the arty video of Bowie’s then-current single, “Heroes” (Crosby introduced it).

It’s unclear, however, whether Crosby had any idea who Bowie was. Buz Kohan, who wrote the special and worked with Fraser and Grossman on the music, says he was never sure Crosby knew anything about Bowie’s work. Fraser has a slightly different memory: “I’m pretty sure he did [know]. Bing was no idiot. If he didn’t, his kids sure did.”

Kohan worked some of the intergenerational awkwardness into his script. In a little skit that precedes the singing, Crosby greets Bowie at the door of what looks like Dracula’s castle (actually, it’s a set that’s supposed to be Crosby’s rented London home). The conceit is that Bowie is dropping by a friend’s house and finds Crosby at home one snowy afternoon.

They banter for a bit and then get around to a piano. Bowie casually picks out a piece of sheet music of “The Little Drummer Boy” and declares, “This is my son’s favorite.”

The original plan had been for Bowie and Crosby to sing just “Little Drummer Boy.” But “David came in and said: ‘I hate this song. Is there something else I could sing?’ “ Fraser said. “We didn’t know quite what to do.”

Fraser, Kohan and Grossman left the set and found a piano in the studios’ basement. In about 75 minutes, they wrote “Peace on Earth,” an original tune, and worked out an arrangement that weaved together the two songs. Bowie and Crosby nailed the performance with less than an hour of rehearsal.

And that was almost that. “We never expected to hear about it again,” Kohan said.

But after the recording circulated as a bootleg for several years, RCA decided to issue it as a single in 1982. It has since been packaged and repackaged in Christmas compilation albums and released as a DVD.

It’s still the most played Christmas duet on WASH-FM (97.1), airing once or twice a day when the station plays nothing but holiday music, said Bill Hess, WASH’s program director. Hess likes how the two men blend their voices. The real clincher, he says, is Crosby, who has been associated with holiday music for generations. ” ‘White Christmas’ really helps sell it,” he says.

Also among the song’s fans is Roger D. Launius, who remembers watching the original Crosby TV special while he was a graduate student and the parent of two children, ages 1 and 3.

“It was a very hectic time in my life, and the song was very peaceful and beautiful,” says Launius, chairman of the space history division at the National Air and Space Museum. “I don’t remember anything else about the special, but I remembered that song.”

Launius hadn’t given it too much thought until about seven years ago, when his now-adult daughter sent him a Christmas CD. Among the selections was the Bowie-Crosby duet.

The other day at his office, Launius checked the hard drive on his computer. Yep, there it was. With a couple of clicks, Launius let the warm harmony, and the memories, come flooding back.