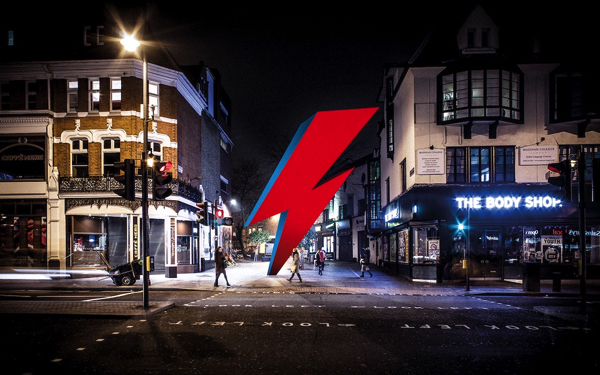 The statue in question would be shaped liked the iconic lightning bolt from his ‘Aladdin Sane’ album cover and would be situated in Brixton, south London – just streets away from Bowie’s Stansfield Road birthplace.

The crowdsourcing project is attempting to raise £990,000 for the nine-metre sculpture, with over £17,000 already raised so far. Donate here.

Its description reads: “Just as an otherworldly David Bowie landed in our lives, the memorial (is it too soon to call it the ZiggyZag?) stands embedded in the Brixton pavement – a three storey tall bolt from above. A nine metre missive from another dimension, hurled from afar.”

“Unexplained, yet utterly familiar; a poignant reminder that life does exist beyond the everyday. That music and art and curiosity are vital, positive contributors to our collective existence.”

Watch a video outlining the project below:


Meanwhile, Bowie’s son and acclaimed film director Duncan Jones paid tribute after his father won five posthumous Grammy Awards earlier this month, sharing a photo of the pair together with the caption ‘So proud of you dad! Would hold you up forever’.

Bowie was honoured with Best Engineered Album, Non-Classical, Best Recording Package and Best Alternative Album for ‘Blackstar’ and Best Rock Performance for the album’s title track. Bizarrely, these were Bowie’s first ever true ‘musical’ Grammy wins – having previously won just Best Video in 1985 and the Lifetime Achievement Awards in 2006.

Watch fans pay tribute to Bowie in Brixton below: