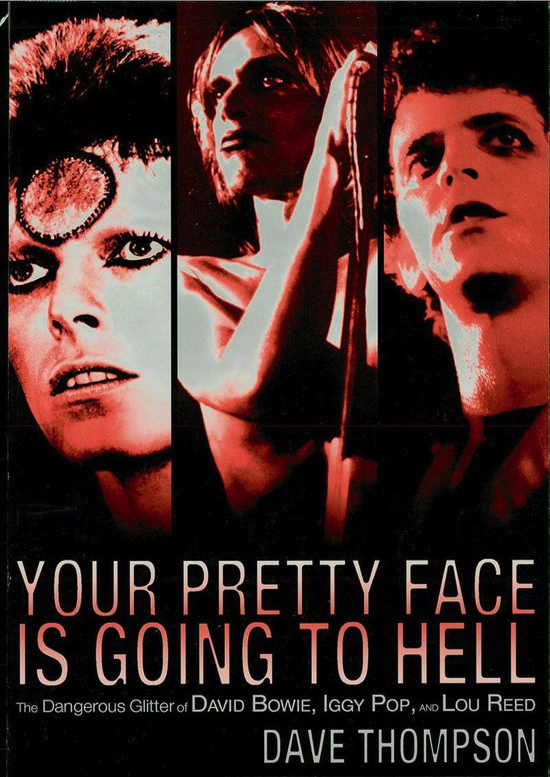 David Bowie Your Pretty Face Is Going to Hell

First-ever look at the intertwining, outrageous lives of three rock legends. When Lou Reed and Iggy Pop first met David Bowie in the fall of 1971, Bowie was just another English musician passing through New York City. Lou was still recovering from the collapse of the Velvet Underground, and Iggy had already been branded a loser… Yet within two years they completely changed the face of popular music with a decadent glamour and street-level vibe. With Bowie producing, Reed’s Transformer album was a worldwide hit, spinning off the sleazy street anthem “Walk on the Wild Side.” Iggy’s Raw Power, mixed by Bowie, provided the mean-spirited, high-octane blueprint for Punk. Bowie boosted elements from both Iggy and Reed to create his gender-bending rock idol Ziggy Stardust. Your Pretty Face Is Going to Hell is the story of this friendship and the incredible productivity and debauchery that emerged from it. Presented here for the very first time are their stories interwoven in a triple helix of sexuality, glam rock, and drugs – as seen through the eyes of the people who made it happen.

English author Dave Thompson has spent his entire working life writing biographies of other people, but is notoriously reluctant to write one for himself. Unlike the subjects of some of his best known books, he was neither raised by ferrets nor stolen from gypsies. He has never appeared on reality TV (although he did reach the semi finals of a UK pop quiz when he was sixteen), plays no musical instruments and he can’t dance, either.

However, he has written well over one hundred books in a career that is almost as old as U2’s… whom he saw in a club when they first moved to London, and memorably described as “okay, but they’ll never get any place.” Similar pronouncements published on the future prospects of Simply Red, Pearl Jam and Wang Chung (oh, and Curiosity Killed The Cat as well) probably explain why he has never been anointed a Pop Culture Nostradamus. Although the fact that he was around to pronounce gloomily on them in the first place might determine why he was recently described as “a veteran music journalist.”

Raised on rock, powered by punk, and still convinced that “American Pie” was written by Fanny Farmer and is best played with Meatloaf, Thompson lists his five favorite artists as old and obscure; his favorite album is whispered quietly and he would like to see Richard and Linda Thompson’s “I Want To See The Bright Lights Tonight” installed as the go-to song for the sad, sappy ending for every medical drama on TV.

Kurt Cobain, Phil Collins, Alice Cooper, Joan Jett, David Bowie, John Travolta, Eric Clapton, Jackson Browne, Bob Marley, Roger Waters and the guy who sang that song in the jelly commercial are numbered among the myriad artists about whom Thompson has written books; he has contributed to the magazines Rolling Stone, Alternative Press, Mojo and Melody Maker; and he makes regular guest appearances on WXPN’s Highs in the Seventies show.