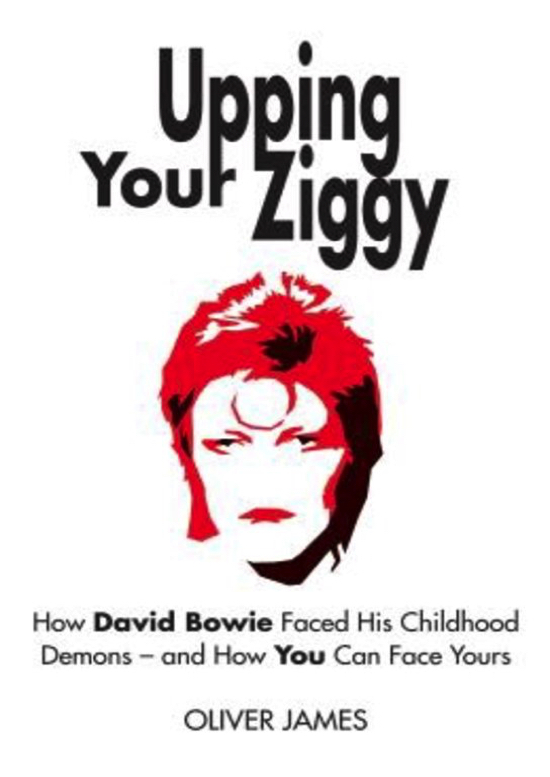 David Bowie Upping Your Ziggy: How David Bowie Faced His Childhood Demons – And How You Can Face Yours

Summary
David Bowie was one of the most famous men of his generation, and remains one of the greatest rock stars of all time. But while his flamboyant career in the public eye has been well documented, much less is known about his family history. In this new book psychologist Oliver James, bestselling author or They F *** You Up, Affluenza and Not in Your Genes, explores the mental illnesses that afflicted members of Bowie’s family, and Bowie’s fear that he too was destined for insanity. Three of his aunts, became psychotic and his grandmother declared the family cursed.

His half brother Terry also became psychotic, to be hallucinating a visitation from God, the famous ‘ crack in the sky and a hand pointing down to me ‘ about which Bowie sang. These family crises left Bowie afflicted with a fear of madness. His music and stage personae during the 1970s were his way of eluding it. Born David Jones, he dubbed himself Bowie. During 1973 there were periods in which he actually believed he was Ziggy Stardust. Through Ziggy, and other subsequent personas including Aladdin Sane and the Thin White Duke, he engaged in an internal dialogue played out on an international stage from which he eventually emerged as the emotionally healthy man who died in January this year. If most exceptional achievement derives from childhood adversity, so does nearly all mental illness.

His brother Terry passed through the door marked ‘ Madness ‘. Bowie opened it, took a good look around and then passed through the adjoining one, marked ‘ Artistic self-expression ‘. Using Bowie’s example, Oliver James shows the therapeutic value to us all or personas, illustrated with cases from his work as a therapist. He demonstrates how we can convert the lead of childhood adversity into the gold or emotional health through identifying the roots of our many selves and choosing who we become.