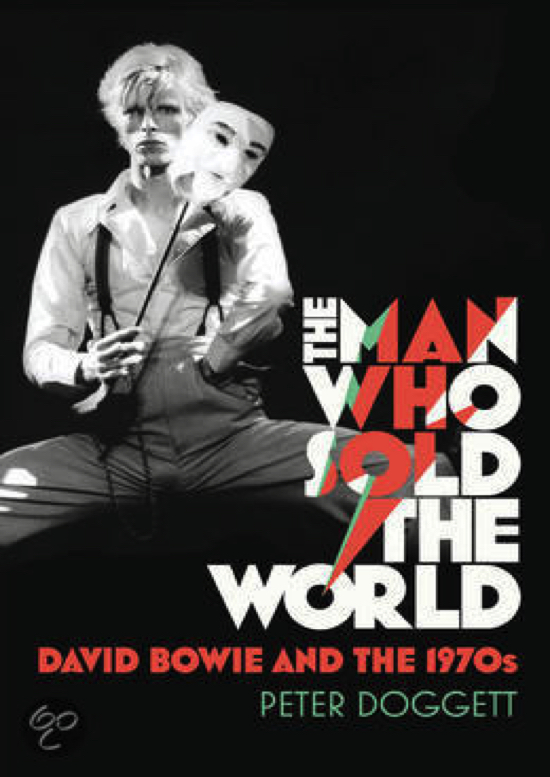 * No artist offered a more incisive and accurate portrait of the troubled landscape of the 1970s than David Bowie. Through his multi-faceted and inventive work, he encapsulated many of the social, political and cultural themes that ran through this most fascinating of decades, from the elusive promise of scientific progress to the persistent fear of apocalypse that stalked the globe.* In The Man Who Sold The World: David Bowie and the 1970s, cultural historian Peter Doggett explores the rich heritage of the artist’s most productive and inspired decade, and traces the way in which his music reflected and influenced the world around him. * The book follows his career from ‘Space Oddity’, his dark vision of mankind’s voyage into the unknown terrain of space, to the Scary Monsters album. It examines in detail his audacious creation of an ‘alien’ rock star, Ziggy Stardust, and his own increasingly perilous explorations of the nature of identity and the meaning of fame, against the backdrop of his family heritage of mental instability.* Among the book’s wider themes are the West’s growing sense of insecurity in the age of oil shortages and terrorism; the changing nature of sexual roles, as represented by Bowie’s pioneering adoption of a bisexual persona; the emergence of a new experimental form of rock music that would leave an indelible mark on the decades to come; and the changing nature of many of the world’s great cities, including London, New York, Los Angeles and Berlin, each of which played host to Bowie during particularly creative periods of his career. * Mixing brilliant musical critique with biographical insight and acute cultural analysis, The Man Who Sold The World is a unique study of a major artist and his times.

The Man Who Sold the World: David Bowie and the 1970s by Peter Doggett – review

What’s this? A book about David Bowie with no pictures inside? Your average Bowie book is composed of little but pictures, the better for purchasers to feast on all that satin and tat. Not for nothing did Bowie call one of his records Pin Ups. He knew that his fans liked looking at him at least as much as they liked listening to him. Brian Duffy, who shot the famously homoerotic image for the cover of Aladdin Sane, wasn’t wrong when he called Bowie “a boy who liked dressing up”. There was always more to Bowie than perms and pan-stick, but the credits on many of his greatest albums didn’t style him “the Actor” for nothing.

Stage-struck and starry-eyed, Bowie loved the paraphernalia of thespianism almost as much as his worshippers did. Indeed, the one concession to the visual in Peter Doggett’s thrilling new study of Bowie is its dust-jacket portrait of our pouting hero emerging from behind a Kabuki mask – an image that serves as a lovely pointer to the book’s contents. A work of impeccable scholarly exegesis, The Man Who Sold the World is about as far removed from conventional biography as its subject is from run-of-the-mill rock’n’roll. Still, it is hard to imagine another book telling you more of what really matters about David Bowie than this one.

Its “unashamed model” is Revolution in the Head, Ian MacDonald‘s song-by-song analysis of the Beatles’ oeuvre and its place in 60s culture. In fact, MacDonald was subsequently commissioned to write a companion volume on Bowie and the 70s. (A few tracks on Heathen aside, Bowie hasn’t done anything of note since 1980’s Scary Monsters.) Alas, MacDonald had apparently done little or no work on the book when, in 2003, he took his own life. Into the breach steps Doggett, whose own books on the Beatles and on rock’s (frequently spurious) claims to radical politicking evince a man wholly at ease with MacDonald’s brand of historicist aesthetics.

Not, says Doggett, that he has a hope in hell of besting his predecessor when it comes to formal analysis. “Ian MacDonald was a trained musicologist,” he tells us in his introduction. “I have chosen to take more of a layman’s path through Bowie’s music.” Some layman. Did you know that “Space Oddity”opens with a floating Fmaj7, and if you did – or could have worked it out with a little noodling – did you know that “the C chord that established the key was played higher up the guitar neck than its companions, despite occupying a lower place on the scale”? “He’s only an eye,” Cezanne said of Monet, “but my god, what an eye!” Pete Doggett, I think we can safely say, has a my-god of an ear.

But is the ear attached to a my-god of an intellect? Can Doggett move beyond the descriptive and categorical into the discerning and critical? Later on in his discussion of “Space Oddity” he mentions an “almost ethereal sequence of ‘ninth’ chords that suggested the spaceman hanging free” and a “Mick Wayne guitar solo that seemed to be testing out the walls of Major Tom’s prison”. I like that “seemed” even less than I like that “suggested”, and can’t help wondering whether those same ninth chords might not equally “signify” entrapment in a song whose lyric required them to. We are back, I’m afraid, with the old chestnut about music and meaning – about whether, say, the flute motif at the start of Beethoven’s Pastoral evokes birdsong or merely reminds us that flautists, like birds, can make incomprehensible sounds that nevertheless please the human ear.

Thankfully, Doggett’s more impressionistic judgments are spot on. Aladdin Sane is “a more ‘real’ album than Ziggy Stardust” – and “a more rewarding one” too. The beautifully multi-dubbed chorus vocal on Diamond Dogs‘s “Sweet Thing” does sound “pinched yet desperate”. The “climactic ‘genocide’ line” in “Future Legend” is “silly”. Bowie’s “daredevil mutation into a Philadelphia soul man” on Young Americans did indeed “mask… self-disclosure”. Less of a downer than it is often taken for, Low really does “convey… a state of emotional dissonance, in which depression [can] be uplifting and boredom become transcendent”.

But it is in contextualising Bowie, in showing how he was nourished by multifarious aesthetic traditions, that Doggett comes into his own. Bowie was always candid about his work being a mash-up of whatever he’d been listening to or watching or reading, though he was often too drug-addled to actually detail chapter and verse. Not so Doggett, who as well as having a fully annotated mental jukebox he can access at will, appears to have read everything from Arendt to Zarathustra. He even owns up to having pushed his eyes through Colin Wilson, demonstrating pretty convincingly that Bowie swiped the imagery for Hunky Dory‘s “Quicksand” from Wilson’s recently published The Occult. Hegel, weirdly, doesn’t get a mention, though every page is infused with his spirit – so much so that the book could be called called “Ziggy Zeitgeist and the Riders from Marx”. Hence Bowie, for Doggett, was the pre-eminent artist of the 70s because he embodied the decade’s entropic dread as much as – perhaps more than – the happy-go-lucky antics of the Beatles did for its predecessor.

Does this mean that our own straitened times augur well for a Bowie comeback? We can but hope. Meantime, we have this challenging, cherishable goad of a guide to the great man’s most vital work. Ian MacDonald might have done it differently, but he couldn’t have done it better, and The Man Who Sold the World takes its place next to Revolution in the Head on the short shelf of necessary reading about pop. Praise doesn’t come any higher.