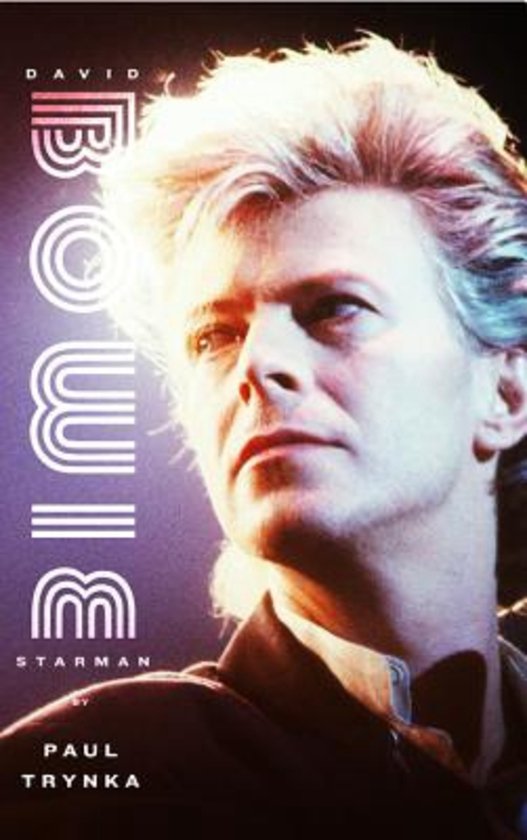 “Ziggy Stardust,” “Changes,” Under Pressure,” “Let’s Dance,” “Fame,” “Heroes,” and of course, “Starman.” These are the classic songs of David Bowie, the artist whose personas are indelibly etched in our pop consciousness alongside his music. He wrote and recorded with everyone from Iggy Pop to Freddie Mercury to John Lennon, sold 136 million albums, has one of the truly great voices, and influenced bands as wide-ranging as Nirvana and Franz Ferdinand.

Paul Trynka illuminates Bowie’s seemingly contradictory life and his many reinventions as an artist, offering over 300 new interviews with everyone from classmates to managers to lovers. He reveals Bowie’s broad influence on the entertainment world, from movie star to modern-day icon, trend-setter to musical innovator. This book will define Bowie for years to come.

“British rock journalist Paul Trynka considers at length the Startling androgyny that made Bowie a defining human being of the 1970s….this book feels close to definitive….many moments in David Bowie: Starmanmade me lean forward with pleasure. “–Dwight Garner, The New York Times

“Drawing upon more than 250 new interviews with friends of Bowie and on previously published interviews with Bowie, former Mojo editor affectionately chronicles the life and music of Bowie from his childhood and youth to the high points of his career, his recent heart attack and almost total disappearance from the music scene…Bowie, in Trynka’s hands is a man who has never settled for the predictable.”–Publisher’s Weekly

“Paul Trynka’s new book, BOWIE: STARMAN, …a deeply researched and closely observed accounting of Bowie’s life and career. Sure, there’s plenty of sex and drugs and rock ‘n’ roll anecdotes. But Trynka takes us well beyond all that rock-star stuff and digs deeply into those peculiar confluences of gifted musical personnel and roiling creative juices that have produced Bowie’s oeuvre.”–Mark Baker, Paste

“Rich in observations from the collaborators and lovers [Bowie] burned through with roughly equal ruthlessness, the book is thorough enough to satisfy all but the most obsessive acolyte.”–Chris Klimek, Dallas Morning News

Something special…The book includes interviews with those who know Bowie best, from childhood friends to those working most closely with him today….This is a terrific book, and readers will be rushing to relisten to the artist’s back catalog. Not to be missed.–Bill Baars, Library Journal

With extensive research, a well judged reappraisal of the work, and an impressively nuanced approach to the drives that have motored the many lives of David Bowie, Paul Trynka has delivered a sharp, elegant and convincing volume on the man that brings freshness to a familiar story.–Mark Paytress, Mojo

was formerly the editor of Mojo magazine (1996-2003). He has also been the editorial director of Q magazine, launch editor of The Guitar Magazine, and editor-in-chief of New Projects at Emap. He is the author of Iggy Pop (Broadway 2007), Portrait of the Blues, and Denim, a history of the fabric. He lives in Greenwich, London.
(Visited 8 times, 1 visits today)
Back