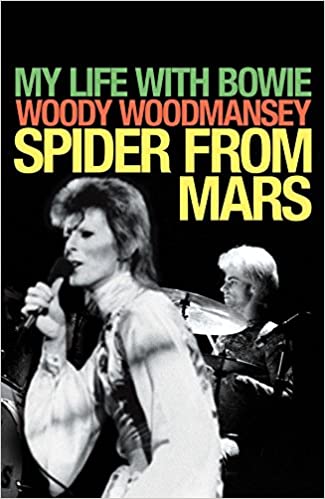 David Bowie Spider from Mars: My Life with Bowie.

A poignant memoir by the last surviving member of David Bowie’s The Spiders from Mars, drummer Woody Woodmansey.

From the Inside Flap

A phone call from David Bowie changed Woody’s life. It was March 1970 and the twenty-year-old drummer from Driffield was about to take a sensible well-paid factory job. Instead, he took a huge leap of faith and joined Bowie’s band, embarking on the adventure of a lifetime.

Woody describes the early years when money was so tight that the band – Woody, Mick Ronson, Tony Visconti and, later, Trevor Bolder – all lived in Bowie’s flat. He takes us through the period of intense creativity as they recorded The Man Who Sold the World, Hunky Dory, The Rise and Fall of Ziggy Stardust and the Spiders from Mars and Aladdin Sane. He reveals how Bowie transformed himself from a long-haired folk singer into the red-haired rock god Ziggy – and cajoled the Spiders (all down-to-earth Yorkshiremen) into outrageously tight, pastel velour suits and girls’ shoes.

They went from playing to forty people in a pub to playing in front of thousands of screaming fans in Britain, the US and Japan. Bowie and the Spiders had achieved their dream, but success came at a price. Insightful and poignant, Spider from Mars lovingly evokes a seminal moment in music history and pays tribute to one of the most outstanding and innovative talents of our time.

Woody Woodmansey was the drummer in the Spiders from Mars, and played on six of Bowie’s albums:The Man Who Sold the World, Hunky Dory and The Rise and Fall of Ziggy Stardust and the Spiders from Mars, Aladdin Sane and two live albums, Ziggy Stardust – The Motion Picture and Santa Monica ’72. He currently leads the super group Holy Holy, who tour and perform David Bowie songs from he 1970s.
(Visited 15 times, 1 visits today)
Back