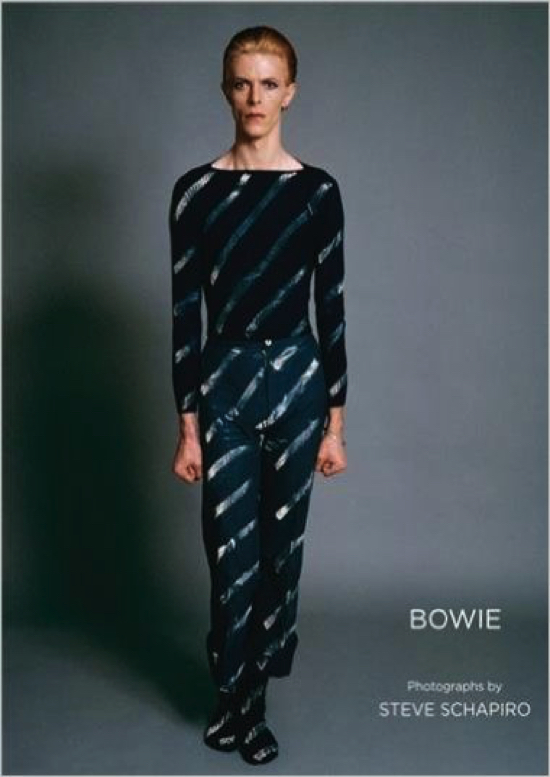 A private photo session from 1974 with the iconic performer featuring many images seen here for the first time.

David Bowie’s unexpected death has invited intense scrutiny over the rich and complex imagery and signifiers in the videos released for Blackstar, his last, enigmatic album. At press time for this book, a Bowie superfan alerted us to the remarkable similarities between these videos, particularly “Lazarus,” and the photo shoot that comprises the bulk of this book.

“David said to wish you all the best with this project,” replied Bowie’s assistant in October 2015, when Steve Schapiro wrote asking for a small text contribution to this volume reproducing their epic photo shoot in Los Angeles from 1974. “We look forward to the book next Spring! [of 2016].”

Bowie, by 1974, was evolving yet again in his spectacular journey as one of pop music’s most creative and brilliant minds. A music-writing tour-de-force, Bowie was also widely regarded as a fashion icon, pushing the envelope of sexuality and style. Bowie had introduced the world to Major Tom, lived the life of Ziggy Stardust, and had just launched Aladdin Sane; the albums Pin Ups and Diamond Dogs soon to follow.

Late that year, photographer Steve Schapiro seized upon a rare invitation from Bowie’s manager for a private photo session with the pop star in Los Angeles. The fruit of that day’s collaboration between Bowie and Schapiro would provide some of the most iconic album art and magazine shoots produced that decade, including album covers for the albums Station to Station and Low. The Thin White Duke was ascending.

These mostly never-before-published images represent Bowie at his most creative and inspired self and offer a rare glimpse into a collaborative process that created phenomenal iconography in the Bowie oeuvre. “From the moment Bowie arrived, we seemed to hit it off. Incredibly intelligent, calm, and filled with ideas,” remembers Schapiro. “He talked a lot about Aleister Crowley, whose esoteric writings he was heavily into at the time. When David heard that I had photographed Buster Keaton, one of his greatest heroes, we instantly became friends.”

Bowie and Schapiro kidded and laughed about shooting a series of close-up portraits on a putrid green background because they felt it was the worst possible background color for a magazine cover, and so they shot one on a lark—the image eventually became a People magazine cover in 1976.

The first photo session started at four in the afternoon and went through the night until dawn. Bowie went through countless costume changes, each one seemingly befitting an entirely new and unknown Bowie persona. Most incredible, from a vantage point some 40 years later, was the costume and doodles of a particular session: Bowie dressed in blue slacks and cropped shirt, painted with diagonal white stripes, and scribbling what appears to be a diagram from the
Kabbalah. They show up again in the video accompanying the song “Lazarus” on the Blackstar album.

A delight for Bowie fans of all intensities and degrees, Bowie provides a rare look at a remarkable musical genius in the throes of creative exploration.

“The transformation of the mundane into the magnificent can take place in a moment, and Schapiro and Bowie both knew how to turn that moment into a myth.” —TIME LightBox

“Knowing that he’s gone makes it that much harder to open the pages of “Bowie” and see the legendary artist silently look back into our eyes, with a smile, having fun in wild costumes we haven’t seen before, in poses that weren’t selected to become iconic. Bowie’s unmatchable charisma soon outpaces the sadness, however, and within the pages, Schapiro has captured quiet and spirituality that’s oft missing plethora of glossy art books about the music icon.” —Cool Hunting

“Bowie clearly made a lasting impression on Schapiro, whose forthcoming book Bowie contains many previously unseen images of the musician whom he describes as ‘just brilliant…someone who made our world bigger.'” —ELLE.com

“Whilst his photos of the Civil Rights Movement, such as the Selma to Montgomery march, came to define an era, Schapiro has also lived through some of the most significant changes in photography, making his insights even more valuable today. Below we catch up with the photographer as his book of mostly never-before-seen photographs of the late polymath and icon are published in Bowie.” —Dazed Digital

“By 1974 David Bowie had shed the skin of Ziggy Stardust and launched himself further into cosmic androgyny with a new character, Aladdin Sane. It was during this time that photographer Steve Schapiro received the rare invitation of a private session shooting Bowie in LA. Bonding over a love of Buster Keaton and a playful desire to toy with the unexpected, the photos show an artist at his creative peak, each photo and costume change with an entirely new set of ideas and references.” —Sabotage Times

“In 1974, photographer Steve Schapiro received a once-in-a-lifetime invitation to a private photo session with David Bowie. The fateful shoot led to a fruitful creative collaboration that elicited some of Bowie’s most iconic images, including the album art for Station to Station and Low. Incredibly, one powerful image, of Bowie dressed in blue slacks and a cropped shirt painted with diagonal white stripes, was referenced 40 years later in Bowie’s haunting final music video, ‘Lazarus.’” —Yahoo! Music

“When Schapiro met Bowie in 1974, the singer had recently shed the lightening-bolt mask he’d donned as Aladdin Sane, the character who had in turn replaced Ziggy Stardust—the persona that first vaulted him to global stardom. In the mid-1970s Bowie veered into what he called ‘plastic soul’ R&B just in time for the disco craze. He donned various guises in front of Schapiro’s camera, yet many images seemed to reveal that the whole rock-star trip—with its sex-and-drug trappings—was getting tiresome. Bowie’s real feelings emerged in his 1975 hit ‘Fame’ (penned with John Lennon), which charted at #1 while elucidating the vapidity of stardom.” —American Photo

“The fruit of that day’s collaboration between Bowie and Schapiro would provide some of the most iconic album art and magazine shoots produced that decade, including art for the albums Station to Station and Low. The Thin White Duke was ascending. Now the pictures are being released in a book but along side some of the familiar images are some never-before-published pictures representing Bowie at his most creative and inspired self.” —Daily Mirror

“The spectacular results of that long shoot, which lasted from 4pm until dawn the next morning, make up a large section of Bowie: Photographs by Steve Schapiro, which is being released today byPowerhouse Books. Some of the pictures in the 104-page tome will seem familiar, as they later graced Bowie’s album covers or were used on magazine covers; others have never seen the light of day before. Schapiro not only loves them all, but treasures his time over the years with the rock and music legend.” —MR Magazine

“Months after Bowie’s death at age 69, these mostly never-before-published images are now compiled in Bowie: Photographs by Steve Schapiro (powerHouse), along with photos from tours in 1976 and 1986….These are more than just dazzling bonus photographs to add to the world’s collective Bowie shrine, though.” —Hyperallergic

“Photographer Steve Schapiro was invited to photograph David Bowie one afternoon in 1974….The images taken that night went on to appear on the albums Station to Station and Low, as well as on the cover of People. One outfit, a diagonally striped navy number, even appears in Bowie’s video for Lazarus. But many of the images were never published—until now. Schapiro’s photographs of the late artist, taken that night and over the course of their friendship, have been collected in a new book, Bowie, published by powerHouse Books.” —The Atlantic

“At that time, the question of which Bowie you were going to get wasn’t to be taken for granted, but according to Schapiro, the one who greeted that afternoon was soft-spoken, relaxed, and polite, charmed to learn that the photographer had once shot Buster Keaton, one of Bowie’s heroes. Though the marathon shoot saw numerous costume and persona changes, what Schapiro witnessed was the constancy of the quiet, thoughtful man behind it all.” —Noisey

“By now we’ve all seen and heard countless David Bowie tributes, mostly pretty slapdash stuff, and we’re ready for something that truly honors his historic legacy. So the timing of Steve Schapiro’s new book Bowie (powerHouse Books, $35) is perfect.” —Maxim

“In 1974, at the apex of the Starman’s meteoric rise to fame, renowned photographer Steve Schapiro received a rare invitation for a photo session with the man in self in LA. Now, some of the never-before-published images from this session have been brought together in a new book – aptly titled Bowie: By Steve Schapiro – to celebrate the life of the late, great icon, and give us all a glimpse at his most creative and inspired self.” —Gay Times

“Schapiro seized upon a rare invitation from Bowie’s manager for a private photo session with the pop star in Los Angeles. The year was 1974. The fruit of that day’s collaboration between Bowie and the photo journalist would provide some of the most iconic album art and magazine shoots produced that decade, including art for the albums Station to Station and Low.” —Radio.com and CBS.com

“The photobook showcases an intimate and personal account of David Bowie between 1974 to 1987. This photobook features never-before seen images of Bowie at his most creative and self-inspired. These photographs expose the collaborative efforts of Schapiro and Bowie during photoshoots, where they experimented with ideas that would inspire Bowie’s next musical and artistic ventures. “ —LensCulture

“A collection of intimate, never-before-seen portraits of the late David Bowie have been published in a new book celebrating the life of the icon. The enchanting images are all the work of renowned American photographer Steve Schapiro, now 82, and feature a young Bowie between 1974 and 1975.” —Daily Mail Online

The mostly never-before-published images in Schapiro’s rare collection represent Bowie at his most creative and inspired self and present a glimpse into the intimacy that Schapiro and Bowie shared during their time together. Bowie and Schapiro kidded and laughed about shooting a series of close-up portraits on a putrid green background because they felt it was the worst possible background colour for a magazine, and so they did on this lark – with the image eventually becoming a People magazine cover
(Visited 17 times, 1 visits today)
Back