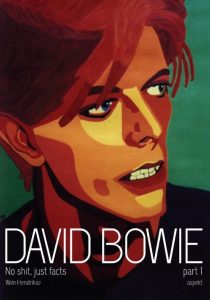 David Bowie conquered glam rock. His concert performances had a very huge cultural impact in the seventies. He is a spellbinding personality in rock music. All the facts about his career are now assembled in two parts. This book is the most complete and best researched book about multimedia performer and glam rock sex symbol David Bowie so far. In Part 1 a very detailed chronology / biography / collectors guide upto 1989. In Part 2 a very detailed chronology / biography / collectors guide 1989 – 2004. Albums and singles discography. All the versions of songs Bowie has per-formed listed from A to Z. Everything about the recordings, the concerts, groups that were formed, groups that split, his influences, collaborations with other artists, soundtracks, bootlegs. Name anything about Bowie’s musical career and it’s mentioned in the book. This book is the result of a lifetime’s interest in David Bowie’s work. It’s a work of love. This book is a great ode to a man who deserves an own encyclopaedia. Jean-Paul Heck (Music Journalist for music magazine Aloha and newspaper De Telegraaf. Winner of the Jip Golsteijn prize 2004). Praise for David Bowie – No shit, just facts. “The most voluminous encyclopaedia about the inventor of glam rock.” Medium Music. “For Bowie fans this is an essential encyclopaedia.” Record magazine. “Are they worth the money? YES. My advice: Buy them!” Savagejaw.co.uk. “The most complete, chronological overview to date.” Newspaper BN/De Stem. “Every serious David Bowie collector should have these books at hand at all times. I am speechless.” Bassman.