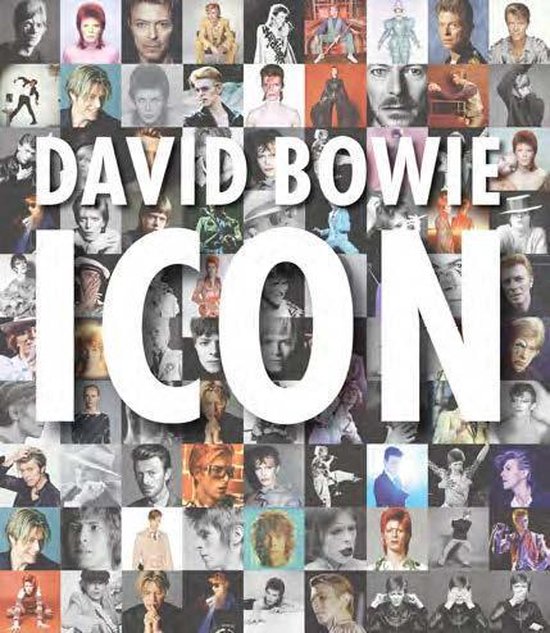 David Bowie: Icon gathers the greatest images of one of the greatest stars in history, into a single, luxurious volume. the result is the most important anthology of David Bowie images that has ever been compiled. Featuring work from many of the greatest names in photography, this book showcases an incredible portfolio of imagery, featuring the iconic, the awe inspiring, the candid and the surprising. Follow the visual evolution of Bowie over the years, through the lenses of his famous photographer collaborators. Photography and text by: Gerald Fearnley, Justin de Villeneuve, Terry ONeill, Masayoshi Sukita, Norman Parkinson, Kevin Cummins, Janet Macoska, Lynn Goldsmith, Geoff MacCormack, Alec Byrne, Brian Aris, Andrew Kent, Vernon Dewhurst, Gavin Evans, Fernando Aceves, Barry Schultz, Ray Stevenson, Chalkie Davies, Markus Klinko, Greg Gorman, John Scarisbrick, Denis ORegan, Mick Rock, Philippe Auliac, Steve Schapiro. When David Bowie passed away on 10 January 2016, the world lost an icon. And yet, his legacy lives on. From his humble origins as a teen musician in the 1960s up until the very end, David Bowies music, lyrics and provocative performances inspired not only his generation, but every generation that followed. While his sound and style underwent several alterations throughout his career, two facts never changed. He was an innovator, and photographers adored him. This book pays homage to this once-in-a-lifetime icon.

“I re-invented my image so many times that I’m in denial that I was originally an overweight Korean woman.”

On 28th September (2022) it has been released the so called ‘ultimate’ photographic book on David Bowie: David Bowie: ICON, published by ACC Art Books.

Talented writer and performer, versatile artist, sophisticated and bizarre at the same time; a trendsetter who was able to synthesise his several interests, inspirations and fascinations. His fortune and curse had been to sign some rock masterpieces from ‘70s. The following production was less incisive and mainstream, because released in very different contexts, with more sophisticated ways of production, without seeking the taste of the audience. Critics and fans used to refer to him thinking about the images of his famous but abused alter-egos: Ziggy Stardust, Aladdin Sane and the Thin White Duke. Before his ascension into the universe exploding into a black star, Bowie had disappeared from the public and music scenes, effecting a renewed interest about himself, gaining a big success with his two latest albums The Next Day and Blackstar. And the top selling exhibition David Bowie Is did the rest, innovating his image in the rooms of museums all around the world, opening in 2013 at the Victoria & Albert Museum in London and closing in 2018 at the Brooklyn Museum in New York.

In the past Iconic Images has already collaborated with the American company ACC Art Books to release some monographic books dedicated to David Robert Jones. This time they collected under the same label incredible shots by 25 different photographers, some from its  enviable archive (Cummins, De Villeneuve, or Norman Parkinson and the missing Terry O’Neill), some talented ones recently acquired (Klinko), and other unavoidable names to enrich this wonderful collection (Sukita, Rock, Kent, Schapiro, Denis O’Regan). The big format of this precious book, combined with a high quality of printing, makes a remarkable and amazing – although not entirely exhaustive – visual synthesis that embraces 50 years of an incredible career. It starts from the 1967 remarkable and professional shooting by Gerald Fearley(recently discovered) when the future rock Martian was still recording his very first album. Here David already reveals a surprising and mimic attitude posing in uncommon and strange ways, with a very particular make up: a genial weirdness still to blossom.

Bowie had been an irresistible attraction for a plethora of photographers during his career. An ideal subject because of his versatility, approach, attitude and alien beauty. Unpredictable and always changing, but always recognisable. The man with a thousand of faces, who sold, declined and  transfigured his image through hundreds of cameras on different formats: covers of albums and singles (being born from vinyl to surviving on the digital streaming), magazines, special projects, performances in cinema and theatre… An exponential explosion of visions of himself, difficult to collect and now inevitably lost in the chaotic pit of the Net.

Here the photos are divided for photographers and are showed in a chronological order, however the different shootings overlap themselves in the years and the very different masks and Doppelgängers of this peculiar artist, falling into a lovely temporal short circuit. In Icon you can find the monochromatic and multicoloured perfection by Sukita (London 1972 and Tokyo 1977) and the documentary talent by Mick Rock (inside and outside the Ziggy Stardust’s tours), until the ‘90s and the 2000s, revealing a fascinating and sober singer. It’s a pity that the Duffy sessions are not included here, but the ones by Justin De Villeneuve and Steve Schapiro are equally iconic. This book records Bowie’s attractiveness for the photographic film, exalted for example in the wonderful black and white by Andrew Kent. It’s impossible to not admire the Thin White Duke in a Parisienne hotel, dressed in kimono, applying the make up in front of a mirror, among the lights and the shadows of a room. In the background a bottle of champagne and a jar of orchids and daffodils.

His old time friend (and music collaborator during the Seventies) Geoff MacCormack completes the vision of the golden years with his beautiful pics on the set of The Man Who Fell To Earth.

The ‘80s are surprisingly and generously introduced by Chalkie Davies and Greg Gorman: the stills from the videoclip Absolute Beginners and the proms for Let’s Dance, Tonight e Never Let Me Down.

It does not miss the Tin Machine period and the Sound and Vision Tour. Then Bowie’s renowned career is intensively translated by the super-cameras by Gavin Evans (Outside) and Markus Klinko (Heathen): an artist immortalised with an hyper-realistic mode. A joy for your eyes.

And again some not so-famous names, but that help to define better the most elusive singer in the history of rock music: Ray Stevenson, Barry Schultz and Janet Macoska give their witnesses of the live stages and the press conferences.

Reporters like Philippe Auliac and Brian Aris are essential for real fans. Some unplanned and unedited bites, at least on paper: John Scarisbrick portrayed his hypertrophic client while he was impersonating the several and exaggerated characters of 1.Outside.

Every contribution is enriched by interesting written statements: memories, anecdotes, curiosities and nostalgia, the same ingredients in the touching foreward by the painter (and childhood friend) George Underwood.

Talking about Bowie, it’s very difficult to be comprehensive, but this collection is a stunning and massive point of reference, a must for every fan. We hope to see in the future a second volume of Icon: other incredible contact sheets, amazing and superb images of the most skilled image-pusher of himself