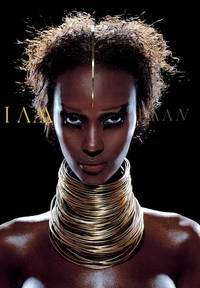 Iman Mohamed Abdulmajid – I am Iman

Iman’s emergence in 1975 sparked an upheavel in cultural identity that continues today, and her first book is a gloriously entertaining hybrid essay on the cultural-cum-political power of good looks.

A quarter century of the most famous photographs by Helmut Newton, Steven Meisel, Herb Ritts, Peter Lindbergh, Bruce Weber, Scavullo, David Bailey, Nick Knight, and many others are contextualized by well-known essayists, a chorus of celebrity contributions, and Iman’s own take on her much-mythologized career. The book’s outrageous pop design–by graphic designers Barnbrook Studios–makes it plain that this is not just one woman’s success story. I Am Iman captures the funny, infuriating, and often absurd validation of black and ethnic looks in a beauty industry where billions of dollars–and the self-image of women everywhere–are on the line.

Iman is a legendary supermodel, a cosmetic mogul, and wife of David Bowie.