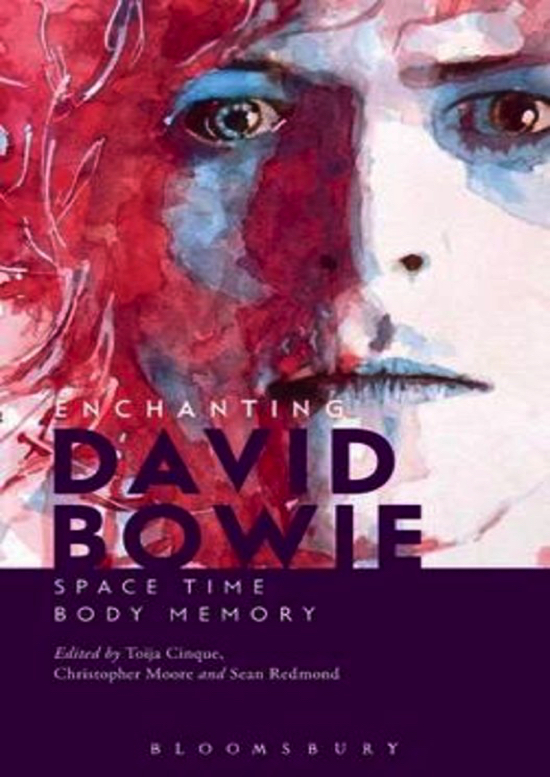 A longstanding, successful and frequently controversial career spanning more than four decades establishes David Bowie as charged with contemporary cultural relevance. That David Bowie has influenced many lives is undeniable to his fans. He requisitions and challenges his audiences, through frequently indirect lyrics and images, to critically question sanity, identity and essentially what it means to be ‘us’ and why we are here.

Enchanting David Bowie explores David Bowie as an anti-temporal figure and argues that we need to understand him across the many media platforms and art spaces he intersects with including theatre, film, television, the web, exhibition, installation, music, lyrics, video, and fashion. This exciting collection is organized according to the key themes of space, time, body, and memory – themes that literally and metaphorically address the key questions and intensities of his output.

This scintillating collection considers David Bowie’s contemporaneity, showing how the star looks very different today-and how every different Bowie is a hero, if just for one day. With each chapter like a crystal ball ricocheting around a multi-level labyrinth, Enchanting David Bowie is full of surprises and delights for the fan and scholar alike. Christopher Schaberg, Associate Professor of English, Loyola University New Orleans, USA, and author of The Textual Life of Airports and _Deconstructing Brad Pitt Consider for a moment, David Bowie’s extraordinary body of work, not just the music, but also his assimilation of different media practices: writing, painting, performance, film and video. This volume coheres around four thematic vectors-space, time, body and memory-to interrogate Bowie’s remarkable corpus of cultural production. In the process, Enchanting David Bowie-itself a standout work-not only illuminates but also construes ‘Bowie’-or versions of Bowie-that are at once compelling and fascinating. Constantine Verevis, Associate Professor of Film & Screen Studies, Monash University, Australia A comprehensive critical study of the enigma that is David Bowie has been a long time coming – and now it’s finally here! Enchanting David Bowie: Space/Time/Body/Memory offers a rich, thoughtful and intellectually challenging series of essays that paint a picture of the complex chameleon that is Bowie. The charismatic array of alter egos, the fascination with cosmic travel, the groundbreaking music that sang its way into the souls of many generations, the transformation of music performance into an art form, the transgressive play with gendered identity – this and so much more makes this collection a must have for anyone serious about Bowie, his identity, his music and his iconic status, which continues to spellbind into the twenty-first century. Angela Ndalianis, Head of Screen and Cultural Studies, University of Melbourne, Australia If Bowie, ever the chameleon, is in the habit of leaving aesthetic corpses behind, the goal of Enchanting Bowie is to dissect them. The volume is organized around four thematic concepts: space, time, body, and memory … This may sound disconcerting to Bowiephiles and musicologists, but the end result is actually quite impressive. Bowie’s performance becomes a supple text that can be endlessly reinterpreted. LA Review of Books

Chapter 7: Ain’t There One Damn Flag That Can Make Me Break Down and Cry?: The Formal, Performative and Emotional Tactics of Bowie’s Singular Critical Anthem ‘Young Americans’
Amedeo D’Adamo, University of Switzerland (It) and the Universita Cattolica, Italy

Chapter 15: Where Are We Now?: Walls and memory in David Bowie’s Berlins
Tiffany Naiman, University of California, Los Angeles, USA

Chapter 16: ‘You never knew that, that I could do that’: Bowie, Video Art and the Search for Potsdammer Platz

Toija Cinque is a Senior Lecturer, Course Chair and Course Discipline Adviser in the School of Communication and Creative Arts at Deakin University, Australia. Cinque’s most recent book is Communication, New Media and Everyday Life, 2011. She edits the journal New Scholar: An International Journal of the Humanities, Creative Arts and Social Sciences.

Christopher Moore is Lecturer in Media and Communication at Deakin University, Australia. His main areas of interest are Games Studies, Digital Humanities and Online Persona,and he recently co-edited the collection Zombies in the Academy: Living Death in Higher Education (2013).

Sean Redmond is Associate Professor in Media and Communication at Deakin University in Melbourne, Australia. He is editor of the journal Celebrity Studies, author of The Cinema of Takeshi Kitano: Flowering Blood(2013), and Celebrity and the Media (2013).