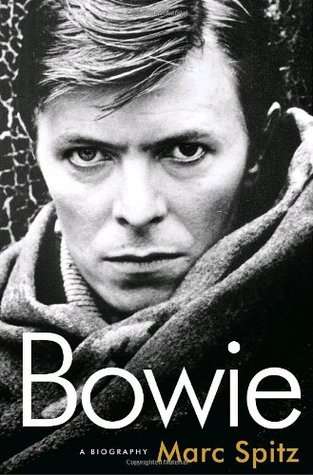 Writing a full-length bio on David Bowie must have been both a terrifying and exhilarating prospect for rock journo Marc Spitz.

With a star of Bowie’s magnitude, every aspect of the project becomes a double-edged sword. Sure, there is a lot of written material to crib from, but all of it taken together becomes a massive and sometimes contradictive myth to contend with. Sure, Bowie’s enormous throng of fans ought to ensure sales, but it also ensures the ire of those fans who might feel their idol isn’t rendered in sufficiently divine repose.

There is also the trouble of sorting through the morass of anecdotes, rumor, fuzzy drug memories and maybe even outright lies that are sure to pop up from aging former associates. But then, these are problems that could crop up with any rockstar bio; the thing is, this is BOWIE, and in case you didn’t know it, Bowie is different.

There is almost no evading cliché when writing about a figure like Bowie. To musicians and music fans of a certain era and aesthetic bent, Bowie is nothing less than a shapeshifting, rainmaking, skinny-white-ass-shaking god in hot pants and heels (or if you prefer, a zoot suit and boxing gloves). His influence on the development of pop music has to be put on the same plane as Elvis, Dylan and The Beatles, yet the cosmic variations in his personae and the sudden, almost polar swings of his aesthetic-du-jour make his influence harder to wrestle than those aforementioned idols.

The fact that this book is likely to be the last word on Bowie for at least the next decade (and probably for much longer than that) must have amped up the pressure. After all, Bowie is aging, possibly quite ill with heart trouble and has kept an uncommonly low profile as of late. The Starman, it seems, has finally fallen to Earth for good, making it all the more important that any account of his life and work be both fair and respectful to his legacy, while still pointing out the follies and embarrassments he endured along the way. In this regard, Spitz does an admirable job, weaving together innumerable accounts into a portrait that is probably not as intimate as many would like, but that does give a warm and definitive overview of Bowie’s life and

Spitz admits early on that his own passion for Bowie is perhaps an obstacle to impartiality, so his strategy is to sequester his own fanboy slobbering into a series of brief personal vignettes that serve to break up the narrative at crucial points and tell the story of an average fan’s (Spitz) relationship to his idol. The technique is solid and for the most part well-done, though Spitz seems to run out of steam for it about two-thirds of the way through and I, for one, didn’t quite buy the tacked-on parting image of Bowie as Steinbeck’s Tom Joad. Nevertheless, Spitz does manage to remain both faithful to and critical of his subject, and keeps his own story in the background.

The tale begins, as it should, in the London suburb of Bromley, where a shy, pale kid named David Jones grows up in a background of almost claustrophobic normalcy interspersed with strange interludes of madness (supplied by his beloved but tragically schizophrenic half-brother). Spitz gets much of the book’s psychoanalysis out of the way early by concentrating on the young Jones’ hang-ups and obsessions, his quite average domestic troubles and most pointedly, his extreme shyness, a trait that Bowie would not only overcome, but would turn into one of his greatest creative assets. “Rather than being a form of self-denial,” Spitz points out, “many believe that shyness is actually a form of heightened self-regard… Unchecked, the self-preoccupation manifests as social awkwardness, but examined and harnessed… one can, with luck and timing in the mix, go supernova.”

Bowie’s star would explode in due time, but not before an excruciatingly long and confusing search for the right musical vehicle to propel him skyward. It was fittingly during this time (basically the whole of the ‘60s) that Bowie made his most difficult and confusing music, much of it concerning gnomes, mimes, gravediggers and dope-farting sitar players. Spitz makes clear through a fascinating and expertly researched chronicle of this period just how desperate Bowie was for the fame and recognition that only a pop star can command, yet how difficult it was for someone as unusual as him to find entry into that world. It was a condition that lent ravenous hunger to Bowie’s already starved ambition, a hunger that would fuel and inform his creative output for the next three decades. Though Bowie was eclipsed at that time by peers like Marc Bolan and Peter Frampton, he displayed a tenacity, originality and purity of vision that would hit critical mass with the formation of his Ziggy Stardust band, and that would sustain his momentum through the rest of his career.

At a certain point in the book, one realizes that Spitz is telling Bowie’s life through the fly-eyes of a crowd of Bowie associates. This does nothing to diminish the narrative, which is well-paced, at times humorous, and always interesting. But one does get the feeling at a certain point (for me it was just after Ziggy and just before the cocaine years) that while we might have learned an incredible amount about Bowie’s life, we still know very little about the man himself. I suppose this is a hazard in any journalistic profile in which the main subject is not a participant, but again, Bowie is different, mainly because he was so keen to try on new personalities. One gets the feeling that Bowie himself had no idea who he was at times, or who he might become the next day. In that context, it might actually be said that Spitz captures perfectly the sense of identity crisis Bowie suffered through, and that readers will just have to suffer alongside him for a few chapters.

In any case, that sense of not knowing Bowie in a personal way subsides as the book enters its final third. There, the details begin to come together to form the picture of a complicated, cunningly intelligent and surprisingly calculated individual who is either so culturally farsighted that he was able to predict whole new zeitgeists or who is so inventive he simply fashioned them out of whole cloth.

Another strength Spitz brings to the effort is a quirky but thorough cultural knowledge base from which to draw connections and entice fans into both the origins and offshoots of Bowie’s work. From Quartermass and Little Richard to Black Randy and Klaus Nomi, Spitz makes sure include plenty of breadcrumbs to keep both new and longtime Bowie fans searching YouTube for obscure Bowie-related clips late into the night. (This being the case, I can’t understand why no one thought to include a discography, or why the photos chosen for the book seem to scream “afterthought”, but those are minor complaints.) Whether or not this is the last major Bowie bio remains to be seen, but if it is, Bowie fans could certainly do a lot worse, and probably not much better.

William Selk: is this the only DVD with Adrian Belew Looking for DVD live in Portugal 1990, Estadio Alv...
Diedrich: hallo, er is niets te koop op deze website, sorry...
Diedrich: hello , there is nothing for sale from this website, sorry...
michael jewell: making money on the backs of others is a real thing....say you paid £1000 for a uncircul...
Cindy Riddle: I was there....
Jim Hawthorn: Hi there! Thank you so much for putting these pages together. Fantastic work. I just not...
nihal: hi how much would this cost~?...
nihal: how much would this cost?...
David: To this day this was the best concert I’ve ever been to. David always loved playing in P...
SusieQ: Was at that concert, Bowie came out late & the sound system was so bad people were lea...
Lars: Hi-are copies of this DVD available for purchase? [David Bowie 2002-10-20 New York ,Beacon...
Diedrich: thank you ,I changed it...
Michael: I want to buy this DVD please contact me...
Fraser Morton: The Belfast Show Was Postponed as he played the MTV EMA awards show instead and was 23/11/...
Steve: I have a audio tape of this gig just wondering if it is a bootleg as I have never come acr...
Russell Trigg: I believe I saw this show at a venue outside of Birmingham, England, although this isn’t...