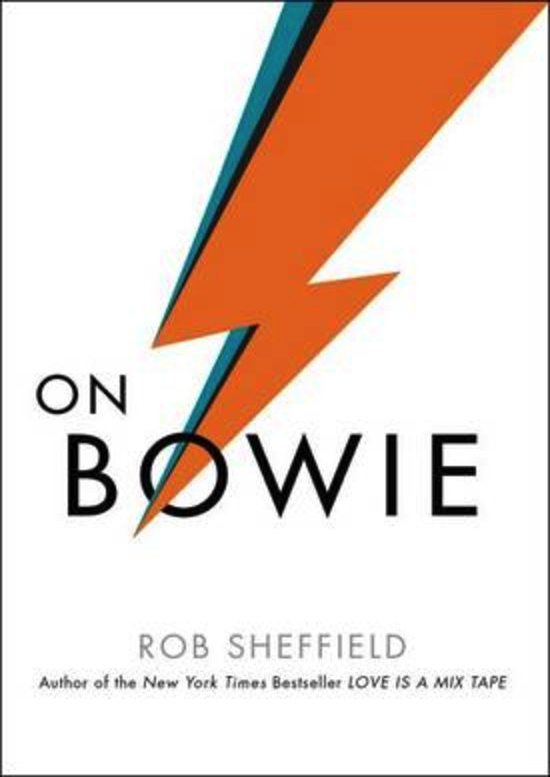 On January 11, America awoke to a planet off its axis: David Bowie had passed away, at 69, after a long and secretive battle with cancer. But not all “Starman” superfans had been asleep when the news broke late into the night—including Rolling Stone columnist Rob Sheffield.

“I got a text from a friend at a quarter to two saying, ‘Did you see the news?’ and I knew it was bad immediately,” Sheffield recalls. “I stayed up all night writing, just alone with the information. I was agonizing about how I was going to tell my wife.”

Sheffield’s eulogy published on Rolling Stone the next morning—a beautiful, openly distraught tribute that thanked the rock iconoclast for his courage and his craft. Now it also serves as the intro to On Bowie, Sheffield’s new book that celebrates the musician’s many artistic guises, from the extraterrestrial flamboyance of Ziggy Stardust through the avant-jazz moribundity of Blackstar. In the style of Sheffield’s other critical appraisals-cum-memoirs, Love Is a Mix Tape, Talking to Girls About Duran Duran, and Turn Around Bright Eyes, he also takes plenty of space to recount Bowie’s sizable effect on his life.

On Bowie is a fitting tribute to a complex icon, with an elegant understanding of Bowie that runs to the marrow. Sheffield describes Bowie’s famously mismatched eyes as “a key part of the Bowie cosmology: the scars on your skin are something to brandish, like the ones on your soul,” and says of his many stylish conceits, “He kept inventing new worlds just for the pleasure of changing them.” However, the book clatters short of hagiographic; Sheffield also describes Bowie’s disquieting holiday duet with Bing Crosby as, aptly, “a historic moment of cardigan-clad cheese.” Sheffield never met Bowie, despite their many years overlapped in New York, but has anecdotes to share from lucky friends, as well as a bounty of strange trivia. (He dated Slash’s mom while filming The Man Who Fell to Earth? Does that explain the hat?)

In its breadth and its affection, On Bowie far belies the month Sheffield had to complete it. “My editor asked, ‘What if you wrote it so fast that we could get it out in time for this summer?’” he says. “I said, ‘Well, he made Low in a month.’”

Pitchfork: Was it cathartic to write about Bowie so soon after he passed?

Rob Sheffield: Absolutely. I was writing it while falling apart at the same time, and Bowie worked like that, too. It’s interesting the way Bowie, even more than other musicians, created a community of fans around the world, people of different generations, different cultures, different personality types, different sexualities. And part of being in a community like that is learning to mourn together. He saw that coming.

Knowing how sick he was and that this was a terminal illness, and he chose to respond to that by making music for this community–it really kind of blows my mind, to be that generous in the face of such horrible news. Imagine you’ve got a year to live and you spend it not only at work but setting a difficult challenge for yourself, not even something that sounds like what you did before. I love how [producer] Tony Visconti said that prior to that album, they were listening to Kendrick Lamar. It’s mind-blowing that Bowie was 69 years old and still not done learning.

The day he passed, before we knew, I was listening to Blackstar and walking around the West Village. I was repeating “I Can’t Give Everything Away” over and over, wondering why it was the last track, what he was trying to tell us. With Bowie, your fanatical dissection was always rewarded.

Yes, exactly. He really wanted to put stuff in there that rewarded that level of attention. I remember how that album sounded for two and a half days when it was just the new David Bowie album. That was mind-blowing enough. Then it was so weird to put that on Sunday night after getting the news and think, “This is a really different record than it was an hour ago.”

Your phrase “crackpot passion,” in the book, was a really wonderful way to put it. He was this still point in a turning world for outcasts and misfits.

Right, even when he was going through a period of not being very emotionally functional. You see something like Cracked Actor and see a guy who’s fucked up on every level, and the only time he shows any emotion is when he talks about the fans and how he’s inspired by them. He says this in a lot of his interviews at the time: “I’m influenced by the audience. They’re not copying me, I’m copying them.” The kids were so much weirder than the actual rock stars, and that he was just trying to keep up with how freaky the kids were. It was really the only human connection that he had.

You mention early on in the book something that I think is undersung in his mythology: the fact that he was the first openly gay rock star.

It seems almost bizarre to remember that there was a 20- or 25-year period where David Bowie was by the far the most famous out queer man in the world. Understand, I’m not in a million years judging, but what I’m saying is that the closet was so oppressive in ways that changed so rapidly. You don’t have to go that far back in time for a totally different culture with it.

Yet Bowie seemed so removed from that.

He was someone who announced in the press, “I’m gay and always have been, even when I was David Jones.” The fact that he was married to a woman, he said, “Well, we met when we were laying the same bloke,” which I thought was funny.

Morrissey has a wonderful interview from 1984 where he talks about seeing David Bowie on “Top of the Pops” and he says, “Well there’s no doubt that this was fantastically homosexual.” He talks about how the most shocking thing for him, growing up in the UK at the time, was how Bowie was always smiling. He never looked oppressed. He would walk into Bradford in 1972 looking the way he looked and if you had any problem with it, that was your misfortune.

The “Starman” clip on the BBC—it really is shocking how much he’s smiling in that. That was a rock star grimace kind of era. You think of Mick Jagger or Bob Dylan or Pete Townshend or Robert Plant, any of the great rock front-dudes of that era: it’s open shirt and serious frown… It’s amazing what a gentle and happy presence he is, even though he’s coming on deliberately outrageous, deliberately trying to offend parents, deliberately trying to defy all the sexual codes of ‘n’roll and show business at that time.

Do you have a favorite Bowie era?

Berlin’s my favorite. I have to say Lodger, but Lodger isn’t really an acclaimed record; it’s the third one in the trilogy, the one people like least. I love, love, love, love that record. It’s weird to think of there being underrated ‘70s Bowie records, but there aren’t many of those.

It completely went to the heart of what I felt like I was going through—like, this guy is a rock star, he has other things he could be singing about, but he’s singing about something I’m going through. A rock star who is an adult, expressing that compassion for you as a teenager! He made me feel like these were open questions, rather than a curse to be lived down