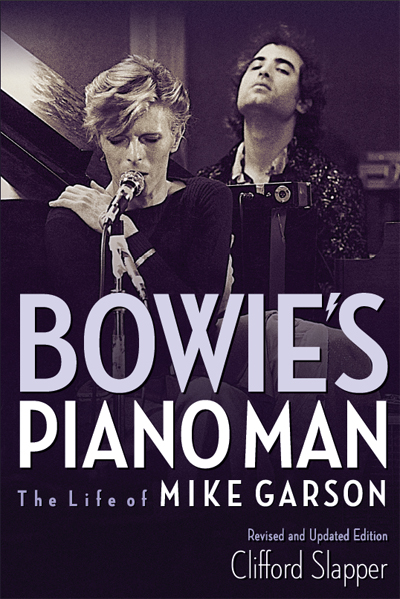 First-ever biography of Mike Garson, long-term pianist with David Bowie, who has played on 19 Bowie albums. Garson is Bowie’s most prolific band member.

The book is based on in-depth long conversations with Garson himself as well as interviews with many of those he has worked with, such as Tony Visconti, Earl Slick, Trent Reznor, Gail Ann Dorsey. Gerry Leonard and Maggi Ronson. It also has about 50 photographs, many never seen before, or Garson with Bowie and others.

This book seeks to shine a spotlight on one of the musicians who has contributed hugely, though often without full recognition until now, to modern musical history, especially through helping to mould the sound of classic albums like Aladdin Sane by David Bowie

“It’s truly inspiring to read of the unique alchemy that Bowie and Garson created, an instinctual working relationship where each trusted the other to ‘do their own thing’, in a spirit of buccaneering playfulness and experimentation that sums up the restless, questing nature of Bowie’s music”
In a six decade career, David Bowie had many accompanists and collaborators, but there has only been one Mike Garson. The Brooklyn-born pianist whose most well known contribution to Bowie’s musical legacy is the unique, unforgettable genre-defying solo on the title track of 1973’s Aladdin Sane, but whose ‘Garsonics’ also added another level of musicality and unpredictability to 9 other Bowie albums and 7 essential live recordings. Spanning 33 years all told, Garson has the unique credit of being Bowie’s longest serving musician, second only as a veteran collaborator to long-time producer Tony Visconti – another Brooklyn lad.

But how much does even the most learned Bowie fan know of Garson’s accomplishment outside of the Bowiesphere? Did you know, for example, that Garson’s skills have also been employed by alternative rock A-listers such as Smashing Pumpkins, Trent Reznor and Nine Inch Nails, No Doubt, Polyphonic Spree and Dillinger Escape Plan; and that, away from rock, he’s worked alongside jazz veterans like Elvin Jones, Chick Corea, Freddie Hubbard to name a few – even a stint with the soulsational Martha and the Vandellas? Not to mention his twenty years with fusion troupe Free Flight, his innovative work with musical therapy and pioneering the Disklavier?

All this and more is explored in this new edition of Clifford Slapper’s Bowie’s Piano Man; peppered throughout with insights from the maestro on schools of musical thought, improvisation vs composition, elitism and gatekeeping in ‘serious’ music – as someone who has straddled avant-garde and industrial rock, via glam and plastic soul, Garson is well qualified to comment – and Garson’s own life philosophy.

Like its subject, author Slapper can share the claim to fame of having been (“just for one day” as the song goes) Bowie’s piano man – when, 33 years after Slapper’s first hearing Aladdin Sane sowed the seeds for his future music career as a pianist, he found himself doubling for Bowie on keys in the now-classic scene from the second series of Ricky Gervais’ Extras where Bowie humiliates Gervais’ alter ego Andy Millman by leading a saloon bar in an extemporised singalong of ‘Little Fat Man’. Garson was surprised and delighted to learn of Clifford’s identity when he visited Garson in Bell Canyon, California for piano tutorials – finding a common bond and immediately hitting it off, and this biography was born. Bowie’s Piano Man initially surfaced as a slim hardback in 2014 via niche publishers Fantom Books, well-received by critics, and has now been radically revised, expanded and updated in this all-new 2018 edition, published through Backbeat Books, an imprint of the prestigious music publishing house, Hal Leonard, no less.

Slapper has done his subject proud in Bowie’s Piano Man, which is quite unlike any of the numerous other Bowie-related books on the shelf; appropriately enough, as Garson is quite unlike any other Bowie collaborator. This is a man with music in his blood and soul, and whose background was quite apart from the seasoned, spit’n’sawdust rockers that comprised the Spiders From Mars, not to mention the freaky sex’n’rdrug’s’n’rock’n’roll of Bowie’s MainMain retinue: A happily married, drink- and drug-free, family man with a solid jazz background, for whom the rock idiom was as alien to him as Bowie’s stage persona. For the first time, the complete story of how this jobbing virtuoso became the Spiders From Mars’ asset is pieced together, with the conduit being avant garde artist Annette Peacock – herself an unsung influence on Bowie (Just compare the Garson-featuring ‘I’m The One’, from her remarkable 1972 LP, with ‘Something In The Air’ on Bowie’s 1999 hours…)

Bowie devotees will find their appetites sated with accounts of the many albums and tours Bowie and Garson did together, with Garson’s recollections – recounted in that droll Brooklyn manner that leaps off the page – complemented by first-hand testimonials of the many musicians and producers Clifford has spoken to directly for this biography: Maggi Ronson (sister of the much-missed Mick), Tony Visconti, Reeves Gabrels, Gail Ann Dorsey, Earl Slick, Ken Scott, Gerry Leonard, Mark Plati, Sterling Campbell, Trent Reznor, Billy Corgan… It’s truly inspiring to read of the unique alchemy that Bowie and Garson created, an instinctual working relationship where each trusted the other to ‘do their own thing’, in a spirit of buccaneering playfulness and experimentation that sums up the restless, questing nature of Bowie’s music, and the painterly way Bowie would combine disparate talents in the studio to create something no two participants could have dreamed up individually.

Garson is a lucid, eloquent speaker when discussing his craft; which is fortunate as his many conversations with Slapper provide a lot of the substance of this book; one gets the impression that a 1-2-1 with Garson would be a wide-ranging, eclectic chat, far from the dry and dusty elaboration of technical minutae one would expect from a virtuoso, more akin to a philosophical chat with a Zen master. Spirituality and humanity is clearly very important to Garson, not just as an underpinning of his musical drive but also his personal ethos and values – but never strays into ‘Pseuds’ Corner’ or the sanctimonious. The role that Garson’s (long since forsaken) devotion to Scientology during the 1970s may have played in the long hiatus in his work with Bowie is amply dealt with here (his evangelical fervour earned him the nickname ‘Garson the Parson’ in the band, with Spiders drummer Woody Woodmansey becoming a fellow convert). Garson’s life philosophy as extrapolated throughout the book is one we could all aspire to, where he wears his accomplishments lightly and nobly, and sees his duty to not only tutor, but mentor, younger musicians; and of course, since Bowie’s death in 2016, to keep the spirit of Bowie’s music alive, through solo renditions live on Facebook and the ‘A Bowie Celebration’ tour.

Through all this discourse and reminisce, Clifford Slapper steers this biography steadily, with an effortlessly readable yet learned style (wearing its critical and cultural references lightly) that even a tone-deaf musical dingus like me found accessible, and the book is rigorously researched, lacking the factual sloppiness and reliance on reheated second-hand source quotes that bedevil many a third-rate Bowie biography. A good biographer, to my mind, is someone who steers the narrative securely but inobtrusively, and can pull off the deceptively tricky job of having a distinctive ‘voice’ while not impressing too much of themselves into the story. The job is made much easier by the ‘fireside chat’ nature of Garson’s easygoing, affable nature, but Slapper pulls of the biographer role effectively; and I for one would love to see a Garson and Slapper live panel or Q&A. In his acknowledgments, Slapper lets slip that through the process of writing and publishing this book, he has nurtured the ambition to write another book, but this time original fiction – a potential development that this reviewer shall be looking out for in earnest.

❉ ‘Bowie’s Piano Man: The Life Of Mike Garson (Revised And Updated Edition)’ by Clifford Slapper, is out now from Backbeat Books.
This revised and updated edition boasts the following additions: • Six new chapters (ie now has 21 chapters rather than 15) and the update of the story through the past 5 years • New Preface and New Foreword written by Mike Garson himself • Many new photos compared with earlier edition, this time in colour, and some of which have never before been seen, of David Bowie as well as Mike Garson • Full update on events 2014-2018 including the 2016 death of David Bowie and its profound effects on his long term friend and collaborator, Garson. • Several additional new interviews, for example with Billy Corgan of the Smashing Pumpkins, with Donny McCaslin whose band played on final Bowie album Blackstar, and with the producer of several early Bowie albums, Ken Scott. These and several other key interviews take their place alongside those already in the earlier edition such as Trent Reznor, Tony Visconti, Earl Slick and Gail Ann Dorsey. • Hundreds of revisions and improvements throughout the text.