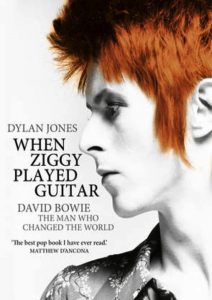 When Ziggy Played Guitar ,David Bowie, the Man Who Changed the World
And then there was David Bowie, the uber-freak with the mismatched pupils, the low-tech space face from the planet Sparkle. This was Bowie’s third appearance on TOTP but this was the one that properly resonated with its audience, the one that would go on to cause a seismic shift in the Zeitgeist. This is the performance that turned Bowie into a star, embedding his Ziggy Stardust persona into the nation’s consciousness. With a tall, flame-orange cockade quiff (stolen from a Kansai Yamamoto model on the cover of Honey), lavishly applied make-up, white nail polish, and wearing a multi-coloured jump-suit that looked as though it were made from fluorescent fish skin (chosen by Ziggy co-shaper, the designer Freddie Buretti), and carrying a brand spanking new, blue acoustic guitar, a bone-thin Bowie appeared not so much as a pop singer, but rather as some sort of benevolent alien, a concept helped along by the provocative appearance of his guitarist, the chicken-headed Mick Ronson, with both of them unapologetically sporting knee-length patent leather wrestler’s boots (Bowie’s were red). ‘Most people are scared of colour,’ Bowie said later. ‘Their lives are built up in shades of grey. It doesn’t matter how straight the style is, make it brightly coloured material and everyone starts acting weird.’ Suddenly Bowie – a man called alias – had the world at his nail-varnished fingertips, and in no time at all he would be the biggest star in the world.

Review
The best pop book I have ever read, dislodging Revolution in the Head and England’s Dreaming. Superb in every way. — Matthew d’Ancona His blow-by-blow account of the performance is breathless in its fan-boy enthusiasm and much of the rest of When Ziggy Played Guitar is rooted in its personal impressions. The by-product of Ziggy’s success was the validation of identity, our identity , Jones writes, and it’s hard not to be moved by his hero worship. New Statesman Jones is a wonderfully fluent writer, with a terrific knack for atmospheric phrasemaking, period detail and juicy factoids. Daily Telegraph Dylan Jones’s account of David Bowie’s rise to superstardom. We’ll eat up anything about the greatest pop star who ever walked this planet. The Herald Magazine Unlike previous Bowie biographies, Jones’ book says less about Bowie and more about the time, reading often, and in a very entertaining way, like a culturally-aware history textbook. For every mention of the miners’ strike or Bloody Sunday there’s a full page devoted to The Velvet Underground or A Clockwork Orange – and these pages are needed to help fully explain how Bowie put together this character who proclaimed let all the children boogie . whiffytidings.com