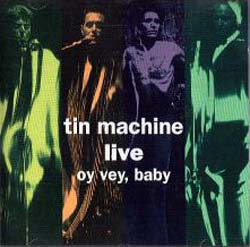 Tin Machine Live: Oy Vey, Baby is a live album by Tin Machine originally released by London Records in 1992. It was to be the group’s last release, and was recorded on the 1991–1992 It’s My Life Tour. The title, suggested by Hunt Sales, was intended as a play on U2’s album Achtung Baby.

The album attracted hugely negative reviews, and failed to chart in the UK or the US. Plans for a second live album, Use Your Wallet (another Sales pun, this time on Guns N’ Roses’ Use Your Illusion albums), were shelved, and David Bowie promptly resumed his solo career with the single “Real Cool World” in August 1992.