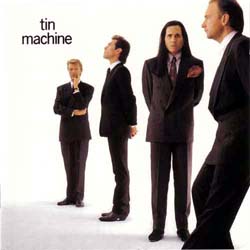 Tin Machine is the debut album of Tin Machine originally released by EMI in 1989. The group was the latest venture of David Bowie, inspired by sessions with guitarist Reeves Gabrels. Drummer Hunt Sales and bassist Tony Sales formed the rest of the band, with “fifth member” Kevin Armstrong providing rhythm guitar.

The project was intended as a back-to-basics album by Bowie, with a hard rock sound and simple production, as opposed to his past two solo albums. Unlike previous Bowie bands (such as The Spiders from Mars), Tin Machine acted as a democratic unit.