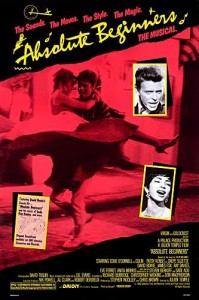 Absolute Beginners is a 1986 British rock musical film adapted from the Colin MacInnes book of the same name about life in late 1950s London. The film was directed by Julien Temple, featured David Bowie and Sade, and a breakthrough role by Patsy Kensit. The film was screened out of competition at the 1986 Cannes Film Festival.[3]

Upon its release on 18 April 1986, Absolute Beginners received immense coverage in the British media. At the time, the British film industry was perceived as being on the point of collapse (with the recent failure of the film Revolution). However, the movie was panned by critics and became a box office flop. Some of the criticisms included stylistic anachronisms, such as the mini-skirt and decidedly 1980s music from the likes of the Style Council and Sade, the bowdlerisation of Kensit’s character (Crepe Suzette had been depicted as a promiscuous “negrophile” in the book), and the casting of Bowie, who made it a condition of his musical contribution.

Absolute Beginners has subsequently gained status as a cult movie[citation needed], in part due to its soundtrack[citation needed]. Some people[who?] compare the movie as the British equivalent of Streets of Fire, a 1984 American movie that was a retro-stylized rock movie with a notable soundtrack, also a commercial failure.

The commercial failure of Absolute Beginners and another film released about the same time, The Mission, led to the collapse of Goldcrest, a major British film studio.