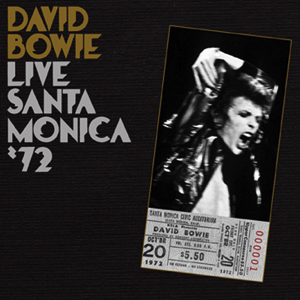 Santa Monica ’72 is a live album by David Bowie, recorded at Santa Monica Civic Auditorium on 20 October 1972 during the Ziggy Stardust tour. Taken from an FM radio broadcast,[2] it was available only as a bootleg for more than 20 years; according to author David Buckley, possessing a copy was the test of a “proper Bowie fan

Track listing
All songs written by David Bowie except as noted.

It seems quaint now to think that illicitly taped shows were once the record industry’s greatest foe. These days bootlegs– particularly bootlegs like Bowie’s October 1972 gig in Santa Monica, which enjoy a degree of fan reputation– aren’t the enemy, they’re a blessed revenue stream. Santa Monica ’72 has had some level of official release before, but this version is repackaged and unlimited: An opportunity for casual fans to experience what is supposedly the best Bowie show on record.

The obvious comparison for Santa Monica ’72 is Ziggy Stardust: The Motion Picture: same tour, but a very different document. That album is David Bowie returning to Britain as a conquering hero (and stunning his fans with his apparent retirement)– this one finds him far from home and still feeling his way into stardom. The Ziggy look and concept– the jumpsuit, the shock of red hair, the sci-fi glam rock– had kicked doors open for Bowie in England, but its impact in the USA hadn’t been quite so great. Santa Monica ’72 is the sound of a cult act pushing hard for breakout success.

Bowie had two big advantages in this push: An exceptional backing band in the Spiders from Mars, and four albums worth of very different material to draw on. The combination let him put on a show that could build and twist to keep its audience riveted. If you’re familiar with Motion Picture, you’ll know that its slow songs get rather lost in the general end-of-tour bombast, with Mike Garson’s piano especially suffering. On Santa Monica ’72, though, Garson sounds as intimate and effective as any Spider on a mid-set semi-acoustic section that forms the record’s slow-burning highlight.

Before that the Spiders set their stall out with a brisk “Hang on to Yourself” and a snarling “Ziggy Stardust”. But “The Supermen”— Bowie’s unearthly vision of future gods– is where this album really starts to smolder. The bridge into the show’s quieter phase, it’s stronger and stranger here than on The Man Who Sold the World, with Bowie’s disturbing images and Mick Ronson’s blurts of caveman guitar playing compellingly off each other. “The Supermen” conjures a sense of uncanny menace that carries the singer through intense takes on “Five Years” and “Life on Mars?”, and ensures “Space Oddity” retains some power even when Bowie’s doing the take-off noises himself. “Andy Warhol” is a standout, closing with a hushed, creepy solo, after which Bowie decides to tell an incomprehensible story about a lobster and a palm tree. The crowd and singer laugh nervously: It’s endearing, given Bowie’s reputation as a showman and manipulator, how gauche all his stage patter on this disc sounds.

Bowie’s in-song confidence and command, though, is impeccable. Art-rock credentials proven after a 10-minute “Width of a Circle”, the show’s second half is a thrilling space glam rave-up, the kind that sparked Bowie’s early fame. Ronson is very much an equal partner, keeping “Queen Bitch” and “John, I’m Only Dancing” savage while Bowie brings out their catty catchiness. His guitar lines on “Moonage Daydream” prowl all over the song, rescuing it from some deeply unconvincing backing vocals.

Not everything Bowie tries on Santa Monica works– I’ve never liked his overwrought reading of Jacques Brel’s “My Death” and even this relatively subdued take doesn’t change my mind. And his take on the Velvet Underground’s “Waiting for the Man”— one of the set’s rarities– is too mannered. But the blistering closing tracks chase doubts from your mind. A fierce “Suffragette City” sounds more like the Turbonegro version than the Ziggy one, and the freshly-written “Jean Genie” is a revelation, sharp and wide-eyed pop rather than the rote glam exercise it became on record. After an hour’s roaming through Bowie’s early catalogue, he and the Spiders sound giddy with confidence, up for anything.

With bootlegs there’s often a danger of confusing rarity with quality: whispered fan legends can wither when exposed to commercial sunlight. But as the man says, the beat it comes out better on a stolen guitar, and Santa Monica ’72 earns its fan reputation. This is at once a snapshot of a hungry group on terrific form, and a fascinating look at an emergent star.