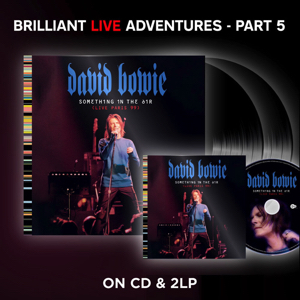 “Lived all our best times…”

Some of you have successfully second-guessed BLA 5, on account of it already having been released for streaming last year. The news is that it will be available for pre-order this coming Friday, 26th February 2021, with a release date of 12th March 2021 on CD and double vinyl.

24th February 2021 London Parlophone Records is proud to announce the newest instalment of DAVID BOWIE ‘BRILLIANT LIVE ADVENTURES’, a series of six live albums from various 1990s era Bowie performances being released on vinyl and CD as limited one run only pressings. The albums and limited-edition boxes for both vinyl and CD to house the full collection will be available only via the David Bowie official store and Warner Music Group’s Dig! store.

The fifth in the series, out 12th March on CD and double vinyl, is SOMETHING IN THE AIR (LIVE PARIS 99) a 15-track live album, featuring 12 previously unreleased recordings and three B-sides of singles from the ‘hours…’ album. The day of the show was a momentous one for Bowie, as that afternoon he was awarded the Commandeurs of the Ordre des Arts et des Lettres, the highest artistic honour that France can bestow.

The Elysée Montmartre performance was one of only seven full shows promoting the ‘hours…’ album. For this special limited run of gigs Bowie dug deep into his back catalogue making these shows particularly memorable. Standout tracks include ‘Can’t Help Thinking About Me’ first released in 1966 and not performed live in over 30 years, ‘Word On A Wing’ from Station To Station reinstated into the set after a 23-year absence, ‘Drive-In Saturday’ performed for the first time since 1974, and ‘hours…’ track ‘Something In The Air’ in its first live performance.

Something in the Air (Live Paris 99) includes all 15 songs performed by Bowie and his band at the Elysée Montmartre on October 14, 1999. Earlier in the day, he was awarded the Commandeurs of the Ordre des Arts et des Lettres, the highest artistic honor bestowed by the country of France. And while the award recognized his 30 years of musical achievements, Bowie wasn’t looking back. He was on the road to promote hours…, his spacy, video game-inspired new album. The energetic show (one of only seven full concerts performed in support of hours…) was filmed and three songs eventually found their way onto various versions of the Survive CD single; the remaining dozen tracks were first issued on the digital version of this album in 2020.

With Page Hamilton on guitar, Gail Ann Dorsey on bass and vocals, Mark Plati on guitar, Sterling Campbell on drums, Mike Garson on piano, keyboards, and synthesizers, and Emm Gryner and Holly Palmer on backing vocals, Bowie performed a diverse setlist spanning decades. Among deep and rarely-played cuts like “Drive-In Saturday,” “Word on a Wing,” and the 1965 Pye single “Can’t Help Thinking About Me” (perhaps on his mind as he prepared the ultimately-abandoned Toy album), the band included five tracks from hours…, including “Thursday’s Child,” “Survive,” “Seven,” “The Pretty Things Are Going to Hell,” and the live debut of “Something in the Air.” ​Rounding out the setlist were popular favorites such as “Rebel, Rebel,” “Changes,” “Life on Mars,” and “China Girl.”

DAVID BOWIE – SOMETHING IN THE AIR (LIVE PARIS 99) CD TRACKLISTING

03 – Something In The Air (David Bowie/Reeves Gabrels)

DAVID BOWIE – SOMETHING IN THE AIR (LIVE PARIS 99) LP TRACKLISTING

Something In The Air

Word On A Wing

Can’t Help Thinking About Me

Always Crashing In The Same Car

The Pretty Things Are Going to Hell