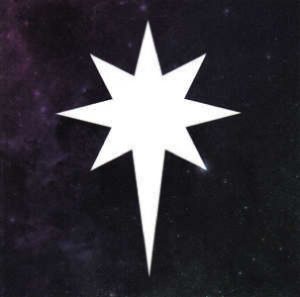 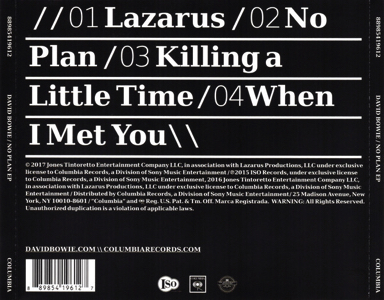 No Plan is an extended play, comprising songs written and recorded by David Bowie, released posthumously on 8 January 2017.
The release coincided with what would have been Bowie’s 70th birthday, almost a year after his death. No Plan compiles the original songs written for Bowie’s Broadway musical, Lazarus, including the titular “Lazarus”, “No Plan”, “Killing a Little Time”, and “When I Met You”. The songs were first recorded by the cast of the musical as part of its official soundtrack.
The recordings featured on No Plan come from the sessions for Bowie’s twenty-fifth and final studio album Blackstar, with “Lazarus” appearing as the third track on the album. Upon release, No Plan debuted at #138 on the Billboard 200. The music video for the title track was also released in accompaniment with the EP. It was directed by Tom Hingston.

The EP received rave reviews from music critics. Exclaim! critic Calum Slingerland wrote: “One would hope the plan for Bowie going forward would be for him to avoid falling into the category of “rock icon with innumerable posthumous releases,” but thankfully for listeners, the music on No Plan holds up.” The Independent’s Andy Gill stated: “Blackstar’s moods and musical modes are continued through these tracks, in which Thomas Jerome Newton’s[disambiguation needed] decline eerily reflects Bowie’s own.”

AllMusic senior critic Stephen Thomas Erlewine thought that the tracks on the EP “provide a bittersweet coda to Bowie’s 21st century comeback,” even if “these songs don’t feel like a surprise”. Alfred Soto of Spin stated: “Presenting listeners with two discrete but related musical adventures like ★ and No Plan, the survivors grasped that even the oblique tastes better with a dash of the obvious.”