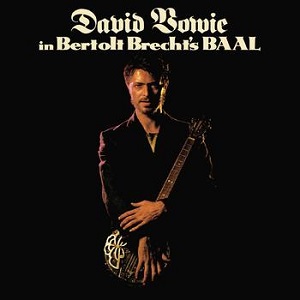 Baal is an EP by David

In August 1981, Bowie had begun rehearsals to appear in the BBC version of Baal. The lyrics to the songs were all translated by Ralph Manheim and John Willett. Dominic Muldowney provided all new musical settings, except for “The Drowned Girl”, which was a setting by Kurt Weill done originally for Das Berliner Requiem. In September 1981, Bowie and Tony Visconti returned to the Hansa studios in Berlin to re-record the five songs Baal performed in the play.

“Baal’s Hymn” is a combination of the vignettes spread throughout the play and establishes Baal’s amoral character. “Remembering Marie A” concerns Baal’s reminiscences of a past conquest, where he can remember a cloud drifting overhead but not the face of the girl he was with. “Ballad of the Adventurers” is Baal’s aggressive lament to the death of his mother. “The Drowned Girl” relates the suicide of one of Baal’s conquests – a video clip for this song was shot by David Mallet at the same time as the one for “Wild is the Wind”. “The Dirty Song” is a short number, with Baal humiliating his lover Sophie.

Bowie’s performance as Baal was transmitted on 2 February 1982, and RCA issued the EP to coincide with this. Both the play and EP were well received, with the latter reaching No. 29 in the UK chart, commendable considering the unconventional tracks. In addition to the 7″ edition, which came packaged in a double gatefold sleeve containing extensive notes pertaining to the musical content and a short biography of Bertolt Brecht, the EP was released as a 12″, which gained it some play in clubs as well as radio airplay.

It would mark Bowie’s final new release for RCA Records. Bowie’s next release was issued by EMI.