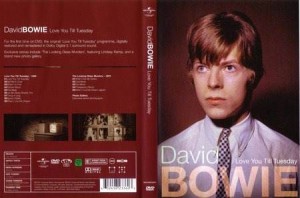 Pitt hired his friend Malcolm J Thomson to direct the half-hour film, which showcased seven of Bowie’s songs (four from his debut album, plus new compositions When I’m Five and Ching-a-Ling. It would also include a mime piece, The Mask. Before shooting started on 26 January 1969, Bowie added another new song to the planned film – Space Oddity. His girlfriend at the time, Hermione Farthingale, and his friend John Hutchinson also performed in the movie. Bowie himself wore a wig throughout the shoot, having cut his hair to army regulation length to audition for the film of ‘The Virgin Soldiers’. German language versions of three songs, and the narration for the mime sequence, were also recorded. Filming was finished by 7 February 1969.

The film was considerably more costly than Pitt had anticipated, and he clashed with Thomson, who wanted to make the Space Oddity segment (featuring Bowie playing both ‘Ground Control’ and ‘Major Tom’, with the latter becoming seduced by space maidens) considerably more risqué. The film failed to interest any buyers, however, and Schneider had left ZDF. Pitt shelved the results, and would continue to be Bowie’s manager until 1971.

In 1984, with Bowie’s global fame at an apex, the growing success of home video led Pitt to contact Polygram, who released the film in May of that year. Deram issued a ‘soundtrack’ compilation in the same month.