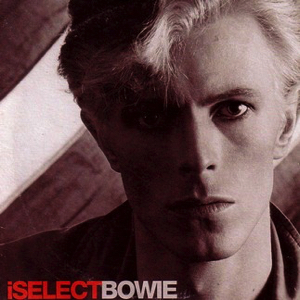 David Bowie iSelect (or iSelectBowie)is a David Bowie compilation CD first released 29 June 2008 in the United Kingdom and Ireland only.

This CD is a collection of personal favourites compiled by Bowie himself[4] and was available exclusively as a free gift with the 29 June edition of British newspaper The Mail on Sunday.

Bowie avoided the usual greatest hits route and instead compiled a selection of favourite album tracks, including only three singles (“Life on Mars?”, “Loving the Alien” and “Time Will Crawl”). In addition, the version of “Time Will Crawl” included on the album is a remix by engineer Mario J McNulty,featuring several newly recorded parts in an effort to revisit some of the material Bowie had released as part of Never Let Me Down, an album which he had identified himself as being disappointed with.

It is the only release to contain the track “Some Are” which has been unavailable since the mid-1990s deletion of the 1991 edition of Bowie’s 1977 album Low on which it was included as a bonus track. It also features the medley of “Sweet Thing” and “Candidate”, and the reprise of “Sweet Thing” as a single track, rather than being split up by song as it has been released on previous CD versions of Diamond Dogs.

It also includes a teaser track combining the “Intro” track and “Hang on to Yourself” from Live Santa Monica ’72, an official rerelease of the bootleg album Santa Monica ’72.

Commercial releaseDue to popular demand, Virgin/EMI released the CD in the U.S. and Canada on 14 October 2008.It is identical to the one released by The Mail on Sunday except it comes in a standard jewel case and the booklet contains the song-by-song comments that were published in the newspaper. It has also been released as a digital download on iTunes.