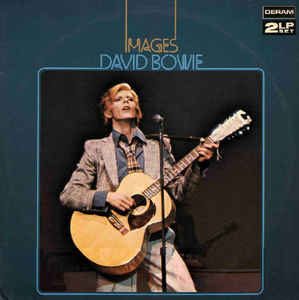 Images 1966–1967 is a compilation album by the British pop singer David Bowie. It comprises his first long player release as a solo artist for Decca Records, titled David Bowie, released in 1967, and various singles and B-sides recorded for Decca during 1966 and 1967.

The arrangements are not for any sort of rock or pop group, they are mostly orchestral with sound effects created in the recording studio. The music reflects a period in Bowie’s career when he was influenced by the London cabaret scene and the song styles created therein, particularly the work of singers such as Anthony Newley.

In the UK, The World of David Bowie had never gone out of print, when Bowie finally had his breakthrough in 1972 with the album Ziggy Stardust and the Spiders from Mars, and could still be obtained in British record shops at that time. In the US, where none of the Decca material was ever released, the original LP and singles were packaged into this double-album set and released in the US on Decca’s American branded label, London Records. The release came at about the same time as Bowie’s sixth studio album, Aladdin Sane, and was planned to cash in on Bowie’s then-growing popularity in the US.