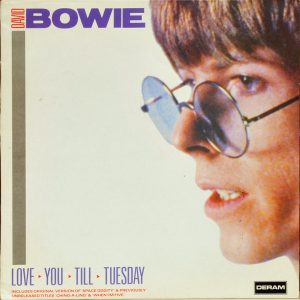 Deram, Bowie’s record label from 1966 to mid-1969, released the soundtrack to the film. Due to its release when Bowie was a star, this has often been confused with his debut album. It does share some songs with the 1967 LP, but most of it was remixed in 1984. It was the first release to feature the original version of “Space Oddity”, “Ching-a-Ling” and “When I’m Five”, and also included previously unreleased versions of “Sell Me a Coat” and “When I Live My Dream”.

In 1992, Pickwick Records reissued the compilation on CD, adding longer versions of “Space Oddity” and “Ching-a-Ling”. It also replaced the single versions of “Love You till Tuesday” and “Rubber Band” and the alternate version of “When I Live My Dream” with those found on Bowie’s debut album, and changed the cover.