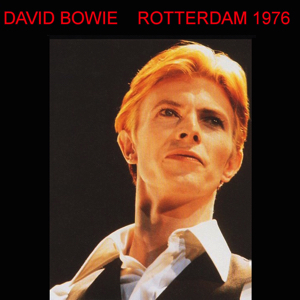 This is a fantastic concert;
It is not without reason that it got so many favourable reviews. Elly de Waard for instance wrote: ‘David Bowie greater than great’. .
This tape was recorded by RCA and has samehow.filteredtered through from RCA to fans.it contains the same songs as Dusseldorf, minus Queen Bitch,wich is missing. After a five minutes’ drum solo during Panic in Detroit,Bowie introduces the band: “Good evening Rotterdam. I’d like firstly to introduce my band Raw Moon,and I’ll introduce the personnel. On keyboards,the origi­nal Yes keyboard player – Tony Kaye. On guitar,co-writer with myself and John Lennon on Fame – Carlos Alomar“. (Tony Kaye sets in the first notes of Changes.) “On percussion Dennis Da­vis,on bass guitar George Murray and on guitar Stacy Heydon … Tony,Tony~ Hold it a minute”. (Tony stops playing.) “Uhm,how many of you here speak English? You’re very kind,because we’re very rude and we don’t speak your language but we do speak English. I’d like to tell you that most of us in this band to­ night,are very ill! Haha,with bronchitis,but we wanna try and rock and roll as much as we can. And my name is David Bowie, and this is a bronchial version of Changes“. The song is played excellently,ending with a magnificent bass solo by George Murray. At the end of Jean Genie Bowie says; “We’ll see some of you tomorrow”.