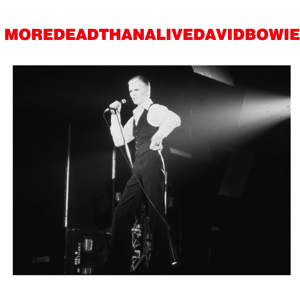 The beginning of this tape is a little distorted but not for long.
The audience is barely heard,probably because this is an open-air concert. Only when Bowie says “Good evening,I’m David Bowie and this one’s called Changes” there is a short moment of massive screaming.
During Waiting For the Man there is a sudden bang which frightens you out of your wits when you’re listening through earphones! It is firework,and throughout the rest of the concert firecrackers are being let off.
During Panic in Detroit and Diamond Dogs something happens to the tape: it sounds as though the original tape was folded or twisted during re-taping. By the way,the whole middle part including the drum solo is missing.
During Changes a large part of the audience got up from their chairs,for at the end of the song someone is heard shou­ ting “Hey,sit down!”. Much screaming after Rebel Rebel too,and when the band has returned to the stage for Jean Genie,Stacy Heydon stops to tune his guitar for a moment. Towards the end of the song a stop during which Bowie rapidly names the days of the week; then they go on again.

iZotope RX2 denoiser tool to remove hiss
Running slowly – speed correction with a factor of 103%.
0:32-3:17 in Station To Station hugely distorted. Removed with fades.
Tiny blip removed @ 4 seconds in Waiting For The Man.
Tape flip between Life On Mars? and Five Years, both clipped – joined with fades.
Start of Panic In Detroit is wrecked:
1. Two Let’s Dance repairs done between 5 and 12 seconds – but source so ropey it’s only a partial success.
2. Portion missing at 22 seconds – gap removed with fades.
3. Tiny gap at 24 seconds removed.
Drum solo missing from Panic In Detroit – gap closed with fades.
Two damages parts in Diamond Dogs (2:43 and 2:53) distorted bits removed and tidied with fades, with a further blip @ 2:41 simply removed.
Sector boundary errors tidied with TLH.