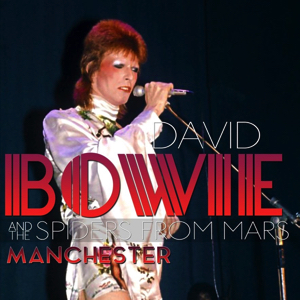 Up to and including Time the same as Worcester.
The Band Intro-Let’s Spend the Night Together/Suffragette City/encore:Width of a Circle/encore: White Light~White Heat/Round & Round Bowie’s singing is hard to hear and there is an irritating bass drone which dominates the tape.
Before Bowie returns for an encore the announcer incites the audience to call “We want Bowie,we want Bowie!”,which at once they do en masse.

REVIEW:
David (thespacekiddette) November 3, 2021 at 12:02 pm |
My first concert Ever – Free trade Hall Manchester 7th June 5.30 show. I was 13 years old – I’m 61 now and still haven’t gotten over it!
Never even seen a strobe light before so when Bowie and the Spiders came on in darkness then strobe the effect was truly shattering! Hang on to Yourself in Black and Silver striped Kansaii jump suit – ripped off for Ziggy Stardust – UNBELIEVABLE! When later in show David sang Space Oddity under a glitterball…. it really was like falling through space!
This is the concert against which all the concerts I have been to in my life since (a lot) – are measured against – some have come near but nothing has ever topped this pure Rock n roll theatre!
I was in school uniform with a girl mate from school – no hyperbole but if there was one day in my life I could go back in a time machine to – it would be this one! I’m just so glad I was clued up enough at that tender age to have got my (£1.25 + 10p booking fee!) ticket…
.After July 3rd there was no opportunity to ever see this show live in the flesh again