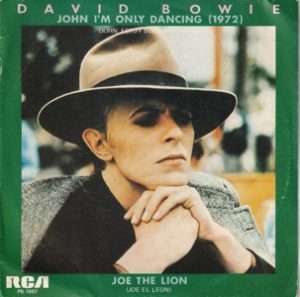 Live versions
– A previously unreleased live version from Boston Music Hall, recorded on 1 October 1972, was released in 1989 on the original Sound + Vision box set, but was not included in subsequent versions of this compilation. The same track, however, was issued on the bonus disc of the Aladdin Sane – 30th Anniversary Edition in 2003.

Other releases
– The Portugal release of the single “Starman” from September 1972 had “John, I’m Only Dancing” as the B-side.
– In November 1972 it was released as the B-side of the single “The Jean Genie” in Japan.
– It appeared on the B-side of the “Cracked Actor” single in Eastern Europe in June 1973.
– In 1979, a remix of the 1972 version of the song was released on various UK and US singles, either as an A-side or as the B-side to “John, I’m Only Dancing (Again)”. This version was included as a bonus track on the Rykodisc CD release of Ziggy Stardust in 1990.

Finally released as a standalone single in December 1979, the re-recording featured a much more funk-influenced take on the track, and has some similarities with the song “Stay” recorded for the Station to Station album in 1976. Originally running at 6:57, the track was cut for a 7″ single release, but the full version was issued on 12″ vinyl – the first Bowie single to have a regular 12″ release in the UK. For the B-side, the original version of “John, I’m Only Dancing” was remixed. After the relative disappointment of the singles from Lodger on the charts, the single gave Bowie some greater degree of mainstream exposure during a period when his work was increasingly being perceived as esoteric and experimental. The long 12″ version was included as a bonus track on the 1991 Rykodisk/EMI remaster CD of Young Americans, on the 2007 collectors edition of the album, and on The Best of David Bowie 1974/1979. The 7″ single version was not released on CD until 2016’s Who Can I Be Now? (1974–1976).

The reworking of “John, I’m Only Dancing” drops the original verses, only leaving the chorus’ lyrics intact, perhaps because of the supposed homosexual nature of the original piece. The new lyrics were simply an embrace of the dance floor and the spirit of disco. The chorus is delivered more slowly and unswung with dance beats instead of the rather retro blues beats of the original, giving time for Bowie to demonstrate vocal virtuosity. The changes were considered somewhat strange given the original’s context, especially the transformation into the “overlong” dance track, given the 12″ version’s extended mix, in which half of the song is a repetitive riff consisting of the lyrics “dancing, dancing, dancing, woo woo woo-oo”.