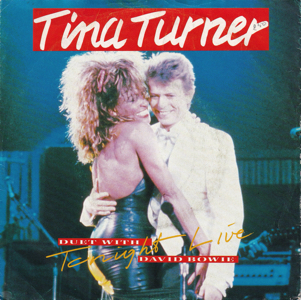 Tonight (Live) was the fourth single from the album Live In Europe, recorded at Tina’s Private Dancer Tour in Birmingham, England on March 23, 1985 with guest vocals from David Bowie. The single was first released in Holland, were it reached #1 on the charts and was then also released in other European countries, but not in England and America. The original studio version of the song, taken from David’s Tonight album, was already a single in 1984.

David: „I’d like to say that this was a privilege to be on the same stage as you tonight. It’s about the hottest place in the uni­verse.”