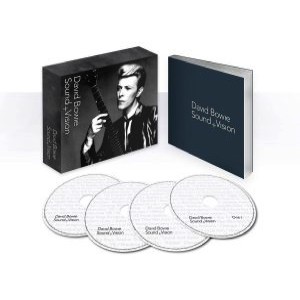 As part of the breakup of EMI that left most – but not all – of the former monolith controlled by Universal Music Group, Warner Music Group acquired the venerable Parlophone label, founded in 1896 and onetime home to The Beatles. Though Universal kept the Fab Four, Warner obtained current artists like Coldplay and the back catalogues of classic ones like The Hollies and Matt Monro…and a certain David Bowie. Parlophone hasn’t announced any major plans for Bowie’s albums as of yet; in-print titles such as The Rise and Fall of Ziggy Stardust and the Spiders from Mars were simply repressed with the new label logo (replacing that of EMI label Virgin Records, now controlled by Universal). Parlophone has also offered a number of Record Store Day vinyl exclusives bearing the Bowie imprimatur. On September 23, the label has a repackaged version of the artist’s out-of-print, 4-CD Sound + Vision anthology returning to stores.

Named for the track on Bowie’s album Low, Sound + Vision was first issued in 1989 by Rykodisc. That independent label, now also controlled by Warner, had just gained the rights to the Bowie-controlled masters of his pre-1983 albums formerly available on RCA. Housed in an LP-sized box, the original Sound + Vision boasted three CDs (or six LPs or three cassettes) spanning the period between Bowie’s second, self-titled album in 1969 and 1980’s Scary Monsters (and Super Creeps). It blended familiar songs and rare or previously unissued alternate versions of familiar songs with rarities, and also included a CD-Video disc with three previously unreleased recordings and the video of “Ashes to Ashes.” This impressive set won a Grammy Award for Best Album Package and racked up staggering sales for an expensive box set, eventually being certified Gold in the U.S. (and entering the Top 100 of the Billboard 200), Platinum in the U.K., and 4x Platinum (!) in Canada.

Rykodisc reissued Sound + Vision in 1995, streamlining the packaging and replacing the disc in the defunct CD-V format with a standard CD-ROM. The next iteration of the set came in 2003, by which time Bowie had moved his catalogue from Rykodisc to EMI’s Virgin Records label. This version of Sound + Vision dropped the “Vision” (the CD-V/CD-ROM!), added a fourth CD to cover the period of 1982-1997, and moreover, tweaked the original track listing. Though the original’s 50 tracks (including the bonus video disc) had grown to 67, a few of the original tracks were replaced with alternate versions of the same songs (“The Wild-Eyed Boy from Freecloud,” “London Bye Ta-Ta,” “Round and Round,” “Fascination”) and all four performances from the CD-V were dispensed with entirely.

What can you expect on the new version? Hit the jump for details including the complete track listing and pre-order links!

The new, 2014 Sound + Vision replicates the contents and remastering of the 2003 version but further shrinks its packaging into what appears to be a CD-sized slipcase containing the four discs and a thick booklet (which presumably will reprint the contents found in the 2003 edition’s book). With this downsizing, however, commendably comes a reduction in price. As of the time of this writing, Sound + Vision is available from Amazon U.S. for 36 dollars and change and from Amazon U.K. at just £13.48 . No new content is being added to the box; the Bowie story continues with Sony’s 2007 10-CD box set featuring expanded versions of Bowie’s five studio albums between Outside and Reality (1995-2003) and, of course, on 2013’s “comeback” The Next Day.

The new Sound + Vision arrives on September 23 from Parlophone/Rhino, and can be ordered at the links below!